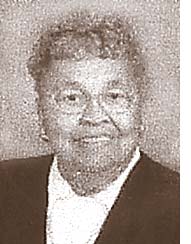 Madeline L. (Byrd) Harshaw was called home to be with the Lord Monday afternoon, Oct. 27, at Friends Care Center. Madeline was born in Springfield, Ohio, on Nov. 26, 1926, to the late William and Virda (Ramsey) Byrd, and was preceded in death by her sister Geraldine G. Johnson. Madeline was a 1943 graduate of Springfield High School. She worked at Wright-Patterson Air Force base for 20 years and Antioch College for eight years. She then retired from Central State University after 30 years.

She was a dedicated and faithful member of Central AME Church for over 30 years. She served as a member of the Lay Organization, on the steward board and Thornton-Wing Missionary Society.

She was the first wife of Louis Gonzales Lopez, married from 1944–1947. They had two children together, Louis Harshaw and Tanya Lopez, who passed away as a baby in 1947. Later she was married to Leroy Harshaw, from 1949 to 1979, and had one child, Lia L. (Harshaw) Ashford