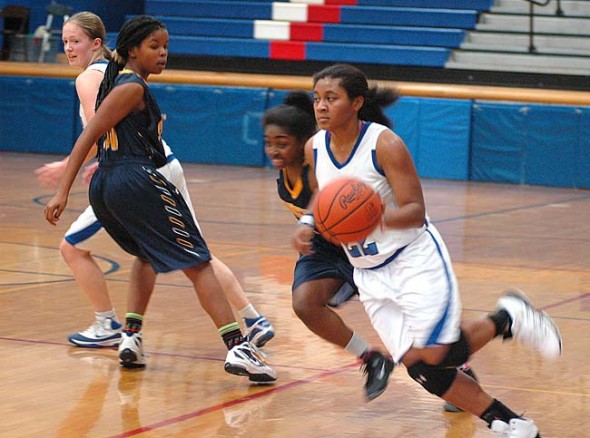 YSHS point guard Elizabeth Smith sped around a Springfield defender during her team’s 45–40 home victory last week. Smith led her team with 18 points. She is averaging nearly 20 points per game this season. (Photo by Megan Bachman)

BASKETBALL
Boys remain undefeated
The YSHS boys varsity basketball team got a big win at Xenia Christian on Friday night to remain undefeated at 4–0 (1–0). The Bulldogs destroyed the Ambassadors, 68-37, thanks in part to junior guard Devon Perry’s six three-pointers.

Perry finished with a game-high 18 points, followed by Kaner Butler with 17, and Isaiah Taylor and J.T. Clark, who both finished with 11. Taylor, third in the MBC in rebounds and first in blocks, unofficially finished with eight boards and four blocks, according to the Fairborn Daily Herald.

Earlier in the week, YSHS defeated London 48–30 in its home opener. Perry once again led scoring with 11 points followed by Taylor (9), Butler (5) and Ethan DeWine (5).

Girls sneak by XC
Yellow Springs High School girls varsity basketball team clawed back from an eight-point halftime deficit last week to sneak by Xenia Christian, 41–40. On the Ambassadors’ turf, YSHS sank 14 of 17 free throws (82 percent) to seal the victory. Xenia Christian only went five of 12 from the line. YSHS also controlled the backboards with 33 rebounds to Xenia Christian’s 21, preventing second-chance points for the Ambassadors.

Point guard Elizabeth Smith scored more than half the team’s points, with 22, and anchored the defense with seven steals and a block. Shanice Wright contributed 10 points and 12 rebounds in the win. Also scoring were Julie Roberts (4), Ashiel Kelly (3) and Jasmine Davidson (2).

8th grade boys lose in overtime
On Dec. 9, the McKinney eighth-grade boys basketball team played a thrilling overtime game at Troy Christian with the home team prevailing. Great defense, passing and an up tempo push by the Bulldogs led by Andrew Clark gave the Bulldogs a 26–17 lead at the half. Troy Christian chipped away at the lead in the second half and came out with two quick three pointers in overtime to seal the win.

“The team is learning games are won by defense, rebounding, and moving the ball,” Coach Branson Pyles said.

Leading scoring for the Bulldogs were Clark with 19, Tyreese Benning, 12, and Trey Anderson with 10 and a huge bucket to send the game into overtime. Leading rebounders were Benning, Clark, and Teymour Fultz.

On Dec. 11, the Bulldogs were overwhelmed with a Xenia Christian press and fast break as the Ambassadors scored 26 of their 32 first half points off turnovers and uncontested layups. The Bulldogs fought back in the second and third quarters with Benning burying four three-pointers and Andrew Clark distributing the ball. Excellent efforts were made by Blake Potter with four points, Trey Anderson with 10 points, Clark with two and with Benning with 16, while Jesse Linkhart hustled to help the Bulldogs back into the game.

SWIMMING
Young team strong at first meet
On Saturday the YSHS swim team swam in the first meet of the 2014–2015 season, the Kenton Ridge Invitational at the Wright State University Natatorium.

The meet ended with a fifth-place finish in the 400-yard freestyle relay (Walkey, Kellar, Sieck and Chick) with a time of 4:41.49, earning the team eight points.

“This was a good meet and a wonderful experience for this young team,” said first-year coach Jody Chick. “We look forward to many best times this season. We are already seeing a lot of growth and potential.”