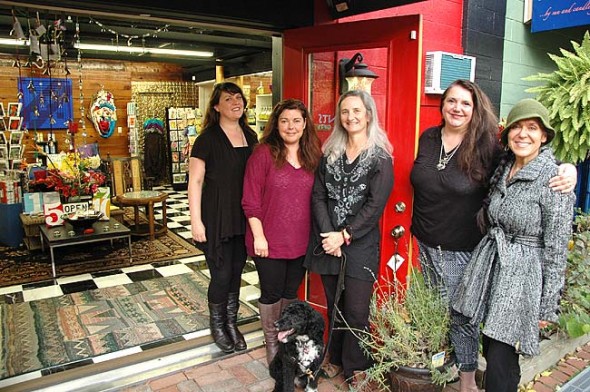 The new store Elements, at 220 Xenia Ave. in King’s Yard, sells bath and body products and gift items. Owned by Samantha Williams Eckenrode and managed by Miriam Eckenrode Saari of Sam & Eddie’s Open Books, the new store was originally to be the home of Constantina’s Soul, a retail store. Pictured are, from left, Saari, employees Christina Fox and Cathy Phillips, Eckenrode and Constantina Clark. (Photo by Megan Bachman)

New Elements has some ‘Soul’

While Constantina Clark never opened the store she dreamed up for King’s Yard — with its capes, fountains and crystal fireplaces — a bath and body shop in its place is fulfilling her vision, she said this week.

The new store, Elements, at 220 Xenia Avenue, sells products at the confluence of spiritual renewal and personal hygiene, with offerings like soaps, lotions, candles, essential oils, incense and aromatherapy diffusers.

Constantina’s Soul, as the store was to be called, was an 18-month project that Clark hoped would be a place to sell eclectic decorative items and the wraps, shawls and capes she creates from indigenous Asian fabrics. While the store never opened, Clark is thrilled that Elements is carrying her wraps and shawls, and, maybe someday, her capes, stoles, hoods, scarves and sashes too.

“We were really looking forward to having her as a neighbor,” Sam Eckenrode said this week. “The way things evolved we ended up being the people who made the doors open but we get to have Constantina’s Soul new designer clothing line, meaning all her work isn’t for nought.”

Clark, who lives outside of Waynesville, is a college English professor who travels frequently to Mongolia for humanitarian work. Clark was excited to sell one-of-a-kind items she comes across on her world travels, but a health crisis, along with the desire to spend more time with her nine children and 10 grandchildren, put the store on the back burner. Eckenrode officially took over her lease last month.

After moving to a shop in King’s Yard much smaller than their previous space on Xenia Avenue, Eckenrode and Saari were excited by an opportunity to spread out into a new space and expand their offerings, especially in the popular bath and body area, they said.

“We wanted to be able to expand on the things we wanted to carry in the shop that don’t fit in a bookstore,” said Saari, who is the manager of Elements. “And there are people who want this stuff but wouldn’t come into the bookstore.”

Saari visited other downtown Yellow Springs gift shops to make sure that Elements wouldn’t duplicate what other stores were selling or create unnecessary competition, she said. In general, Saari saw that bath and body products (what one patron called “lotions and potions”) were not available in abundance here. She chose to carry bath and body lines not offered at other shops, including Thymes, Caldrea and the full line of Zum products.

Eckenrode had the idea to carry the higher-end Thymes line after a “bath of a lifetime” in a clawfoot tub at a Vermont bed and breakfast, where a big bar of eucalyptus soap was the star. By contrast, the goat milk Zum bath product lines is more “young and hip” in Saari’s words.

Clark, who has taught yoga classes and organized women’s circles in Yellow Springs in recent years, said that it all worked out in the end.

“I had a beautiful vision for the store and I’m quite confident that [Miriam] can fulfill it,” Clark said.

Eckenrode and Saari look forward to having both spaces in the beautiful setting of King’s Yard, which attracts a lot of tourist traffic, they said. Since it opened in fall 2012, Sam & Eddie’s Open Books has done well in its new location, Eckenrode added, thanking the work of former employees John Caldwell, Lin Wood and Nicole Manieri.

With Elements, Eckenrode and Saari now have more space to display the late Eddie Eckenrode’s art. And they love the stained wooden walls, black and white floor and good lighting that Clark installed.

Owning a bath and body store has an added benefit, Eckenrode said.

“We love the space here — and it smells good.”