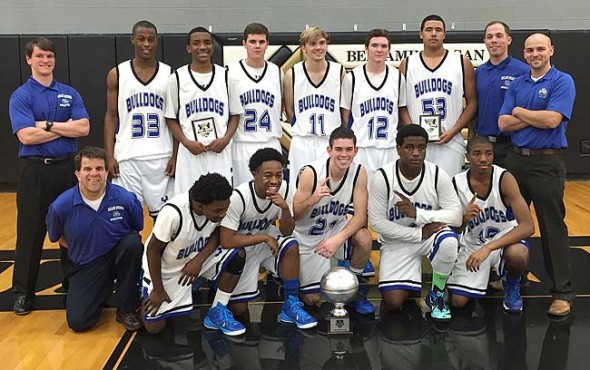 The YSHS boys varsity basketball team got a big win at Xenia Christian on Friday night to kick off Metro Buckeye Conference play. The Bulldogs destroyed the Ambassadors, 68-37, thanks in part to junior guard Devon Perry’s six three-pointers.

Perry finished with a game-high 18 points, followed by Kaner Butler with 17, and Isaiah Taylor and J.T. Clark, who both finished with 11. Taylor, third in the MBC in rebounds and first in blocks, unofficially finished with eight boards and four blocks, according to the Fairborn Daily Herald.

Leading the team were juniors Butler (17 points, 7 rebounds), Taylor (10 points, 10 rebounds, 5 blocks), and senior Liam Weigand, who, in addition to scoring 10 points, made four of four free throws in the fourth quarter to seal the win.

The Bulldogs then dismantled Riverside in the championship game 71—41. Butler and Taylor led the way again with 22 and 15 points, respectively, as all 11 players on the roster made the scorebook. YSHS starts the season 2–0.