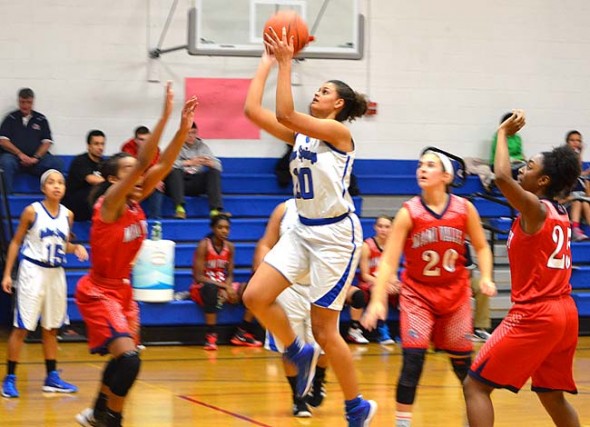 Shanice Wright drove down the lane past a crowd of Miami Valley to sink a lay-up during the Yellow Springs High School girls varsity basketball team’s 51–32 home loss on Thursday. Wright, who scored 10 points in the contest, currently leads the league in rebounds with 8.2 per game. (Photo by Megan Bachman)

BASKETBALL
Boys win nail-biter at home
The YSHS boys varsity basketball team is now 12-3 after an unexpected 38–36 hiccup at Middletown Christian early in the week and a heart-pounding 47–46 victory over Division 1 Stebbins on Saturday night.

The Bulldogs led by as many as 14 in the Stebbins home game, but the Indians clawed back in to take a three-point lead with under four minutes to play in the game. With Isaiah Taylor (who led the way with 15 points) on the bench with four fouls, junior forward Kaner Butler took over the game, scoring all nine of his points in the fourth quarter.

YSHS led by just one point with 10 seconds remaining, and the game was exciting — and strange. Senior Liam Weigand was fouled and stepped to the line to shoot two. He made the first, but missed the second. At this time, junior Devon Perry was waiting at the scorers’ table to check in for Weigand on the second make. The shot missed and was rebounded by a Stebbins player who attempted an outlet pass to the wing. Perry, in a fit of excitement, jumped up and stole the pass, took it to the hoop and got fouled. However, due to the missed free throw, he was an illegal participant in the play. The basket was waived off and the Bulldogs were assessed a technical foul. Stebbins best freethrow shooter stepped to the line but missed one of two. With just a one-point lead, the Bulldogs held on the final possession as Stebbins’ first shot went long and a follow-up attempt was blocked by Taylor as time expired.

Girls struggle to score, lose two
After a competitive, back-and-forth first half, the YSHS girls varsity basketball team was outplayed in the second by visiting Miami Valley on Thursday to lose to its conference foe 51–32. The Lady Bulldogs were outscored 31–15 in the final two quarters of play in the heated MBC bout.

YSHS point guard Liz Smith led scoring with 14 points but struggled from the field, where she went 2–11 in addition to 1–5 from behind the arc. Smith added seven steals in the contest.

Shanice Wright scored 10 points in the loss, Jasmine Davidson added six points and Ashlei Kelly scored two free throws to complete the team’s scoring. Overall, the Lady Bulldogs only shot 9 of 37 from the field (24 percent), though they went 13 of 18 from the stripe (72 percent).

On Saturday the team dropped an away game at West Carrollton, 64–37. After hanging with the home team for the first quarter, the Lady Bulldogs saw their one-point lead disappear when they were outscored 23–7 in the second. Turnovers were costly for YSHS — they had 20 — and they continued to struggle from the field making just 13 of 44 shots (29 percent). Smith scored a team-high 18 in the contest, while Wright added nine and Julie Roberts scored four points.

Later in the week, the Bulldogs played in a rematch with the Greenon Knights. After being dominated by Greenon during the team’s first game in early December, the game was a barometer of the team’s progress.

The Bulldogs stayed right with the Knights in a close contest by leading the first three quarters by scores of 9–7, 18–17 and 32–30. The fourth quarter became surreal as the referee whistles echoed off the walls of the gymnasium. With two players fouled out of the game, the Bulldogs made a valiant effort and had a couple of opportunities in the final minute to take back the lead. Greenon held on and made just enough free throws to win 38–34. Coach Branson Pyles was impressed with the team’s effort.

The 200-yard free relay was exciting with a first-place finish by Brintlinger-Conn, Kellar, Walkey and Chick with a time of 2:01.72, and Romohr, Morrison, Piefer and Sieck brought home a fourth-place finish with a time of 2:22.31. In the 100-yard backstroke, Chick placed first (1:05.35) and Morrison placed fourth (1:54.70). Brintlinger-Conn (1:34.15) and Sieck (1:34.59) then placed second and third in a close 100-yard breaststroke. The final swim did not let down the Bulldog fans. Walkey, Miller, Brintlinger-Conn and Chick finished the meet with a first-place finish in the 400-yard freestyle relay.

“This was a great meet for the team,” Coach Jody Chick said. “The Bulldogs finished third overall due to the mere size of West Carrollton and Greenville High School teams, but the swimmers were well matched for some exciting swims and there were many best times for the Bulldogs.”