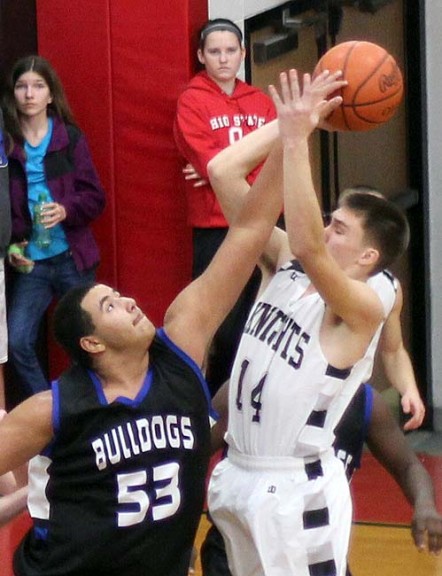 Isaiah Taylor went up to block a Greenon player during the YSHS boys basketball team’s 70–35 away victory on Dec. 22. Taylor scored nine in the contest in which every Bulldog player made the scoresheet. (Submitted photo by Jimmy DeLong)

The YSHS girls basketball team lost its third straight game this week in a 43–34 home loss to Riverside. They are now 4–6. With no bench players, the five-deep Lady Bulldogs were only down by three at the half, but the gap widened to seven by the start of the fourth and the home team couldn’t catch up.

Despite consistent foul shooting, the turnover-prone Lady Bulldogs (12 turnovers) failed to stop the bleeding against Riverside. Meanwhile, they went only 10 of 43 in field goals. Sophomore guard Liz Smith scored a whopping 26 of the team’s 34 points in the loss, while Shanice Wright and Danny Horton added four each.

In a 34–24 loss to Middletown Christian on Dec. 18, the Lady Bulldogs were held to just eight second-half points. Smith, who averages close to 20 points per game, was kept to just 10 in the contest, while her solid defensive effort that included nine rebounds, four steals and three blocks couldn’t keep the home team from coming away with the win.

After a 4–0 start, the YSHS boys basketball team lost to Troy Christian in front of a home crowd on Dec. 16. While they held the visitors to just two points in the first quarter, they couldn’t put away their opponents, who also came in undefeated, and lost 49–39. Jared Scarfpin scored 11 points for the Bulldogs in the loss.

Later in December, the Bulldogs pulled out satisfying road victories at Temple Christian (53–27), Greenon (70–35), and Jefferson (64–43) but came up short at Northridge (69–52). At Greenon, all 10 Bulldogs put points on the board. Ethan DeWine led the team with 13 points, followed by Kaner Butler and Cameron Miles with 10 each.