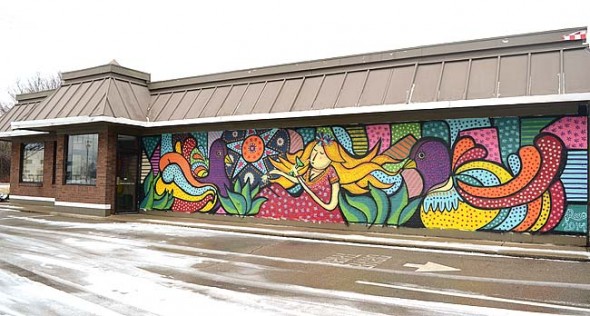 Dona Margarota’s, a new Mexican restaurant on the south side of town, is working towards opening its doors in 2015. Last year visual artist Rodrigo Onate (Roco) completed this mural on the restaurant’s facade and redesigned its interior. (Photo by Megan Bachman)

Margaritas on hold, for now

A new Mexican restaurant hopes to open its doors on the south side of town later this winter, but the county health department believes the process could take longer.
Dona Margarota’s at 1535 Xenia Ave. will resubmit building plans this month to the Greene County Health Department — one of the last hurdles the restaurant needs to clear before opening.

Owner Tony Avalos, who purchased the building in early 2014, said this week he was surprised that his plans were disapproved, but that he remains undeterred in his goal to open Dona Margarota’s.

“I’ve been doing business for 23 years with restaurants across the state and the last thing I do is the health department, who always approves us,” Avalos said, adding, “Otherwise we’re pretty much ready.”

After a green light from inspectors, with few final touches Dona Margarota’s should open soon, perhaps as early as March or April, Avalos said.

But Leopold said this week that the restaurant still has plenty of work to do before opening. Once the health department receives new plans, it has 30 days to approve them, and may request additional information. After construction is complete (or in some cases during construction), a series of inspections are needed to examine plumbing, fire, building and food preparation systems. Finally, the restaurant will need to apply for and get a food license from the health department, Leopold said.

Last May, villagers in the south side precinct 443 overwhelmingly approved a local liquor option for the restaurant, which was needed since Yellow Springs previously reached its quota for class D5 liquor permits and Avalos was keen to offer beer, wine and spirituous liquors like margaritas at the restaurant. Avalos went on to receive a permit from the state Liquor Control Commission, and later a permit extension when his planned fall opening was delayed, he said.

Since Avalos bought the building, he has planned some small renovations, including transforming the front counter to a bar and adding a sink there, but has focused more on aesthetic upgrades in the 2,100-square foot former Kentucky Fried Chicken franchise, he said. Avalos hired Mexican-born visual artist Rodrigo Onate known as Roco, of Minneapolis, to complete an outdoor mural and design the interior space in a style that, according to Roco’s website, combines Mexican folk art with influences like Frida Kahlo and Andy Warhol.

Long-term plans for the restaurant, designed initially for 22 indoor tables, include a 15-table patio to be constructed on the building’s south side, Avalos added.

After the health department denied his initial plans, Avalos hired an architect to flesh them out but didn’t rush to resubmit because he didn’t want to open the restaurant in winter, he said. Avalos also has been busy running his other Mexican restaurants, he said, which includes eight restaurants across Ohio under the business name Los Cabos, Inc.
The location for Dona Margarota’s has been rented by several businesses since 2010 after KFC closed there, including CJ’s Southern Cooking, Drive-Thru Buffet and Artistic Delirium Tattoo and Piercing. Avalos bought the commercial property for $185,000 in January 2014 from Bellbrook residents and fast food franchisers Don and Joan Bowling.