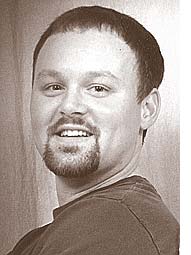 Brett Anthony Rinehart, of Kettering, Ohio, left this earth in the presence of loved ones on Friday, Feb. 6, 2015.

Brett was born July 8, 1973, in Coshocton, Ohio, to Linda Cushman and Dean Rinehart. He attended Lincoln Elementary through first grade and then moved to Yellow Springs. He participated in plays and was the lead role in the play Oliver. He enjoyed school forest, tennis, orchestra, mock trial, track and senior skip days. Brett made many lifelong friends in elementary school. He graduated from Yellow Springs High School in 1992.

Brett was a gifted litigator and took pride in his work. His sister, Lauren, often referred to him as “a beast” in the courtroom. He enjoyed watching tennis and was an avid OSU buckeye fan. He enjoyed game nights with Joe, Jerry U., Jerry W., Greg and others. He also loved to go to the movies with Jerry. Brett adored his family and being the first-born grandchild on both sides, he was the apple of his grandparents’ eye. Brett loved spending time with his nieces and nephews and attended many sporting events. Brett was a vegetarian and was known in the family for making the best buckeyes, macaroni and cheese and sweet tea. He loved cats and his aquarium.

One Response to “Brett Anthony Rinehart”