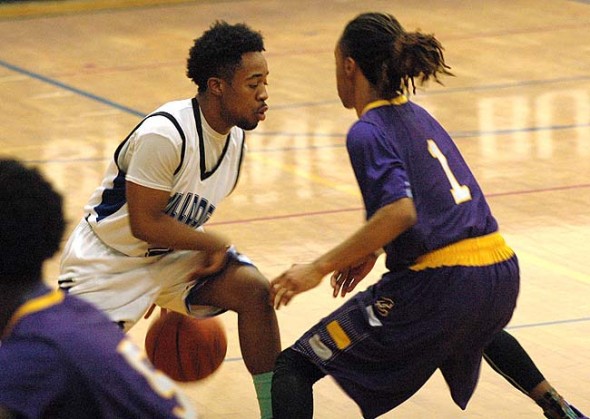 Bryce White contributed to the Bulldogs’ overwhelming win against Dayton Christian Friday night before a home crowd. The Bulldogs are now 14–4 for the season. (photo by Lauren Heaton) 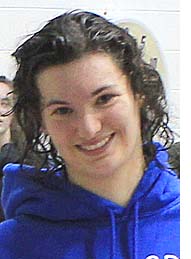 “This was the best conference finish in years, if ever, for the girls,” said Coach Jody Chick.

Charlotte Walkey also took home a first-place win for the Bulldogs in the 100-yard butterfly with a time of 1:19.65. She finished seven seconds ahead of the second-place swimmer. Walkey added a second-place finish in the 200-yard individual medley with a time of 2:53.97.

The big points for the team came from the relays. In the 200-yard freestyle relay, the Lady Bulldogs brought home a first-place finish. The team of Olivia Brintlinger-Conn, Jorie Sieck, Walkey and Chick came in with a time of 1:59.62. The B relay of Elle Peifer, Maddie Kellar, Hannah Morrison and Emma Romohr finished in fourth place with a time of 2:22.03. In the 200-yard medley relay a third-place finish was achieved with Chick on backstroke, Sieck on breaststroke, Walkey on butterfly, and Brintlinger-Conn on freestyle with a time of 2:15.75.

“The swimmers did a wonderful job at the conference meet and we are very pleased with the progress made by this young team,” Coach Chick said. “Hopefully we get more swimmers on the team next year.”

BASKETBALL
Girls punish DC at home
The YSHS girls varsity basketball team team rolled over Dayton Christian on its home court last Thursday, 49–24. Improved shooting and a punishing defense (23 rebounds and 14 steals) made the difference for the Lady Bulldogs, now 7–12 (3–7 in MBC).

Earlier in the week, YSHS lost a nail-biter at Catholic Central, 40–36. The Lady Bulldogs nearly erased a 21–14 halftime deficit with strong third-quarter play, but weren’t able to overtake the home team. Smith scored 17 in the loss, while Wright and Kelly scored seven points each.

On Monday, Feb. 9, the girls breezed by Emmanuel Christian 52–37 as Wright scored a season-high 17 points while bringing down a huge 20 rebounds. Wright leads the league in rebounds with 8.5 per game.
Boys defend home court

The Varsity Bulldogs are now 14–4 after two big conference wins at home last week over Xenia Christian and Dayton Christian. YSHS finishes out its home schedule this Friday against Middletown Christian, when the team’s seniors will be honored on Senior Night. Graduating seniors on the team are Liam Weigand, Cameron Miles, Bryce White and Jared Scarfpin.