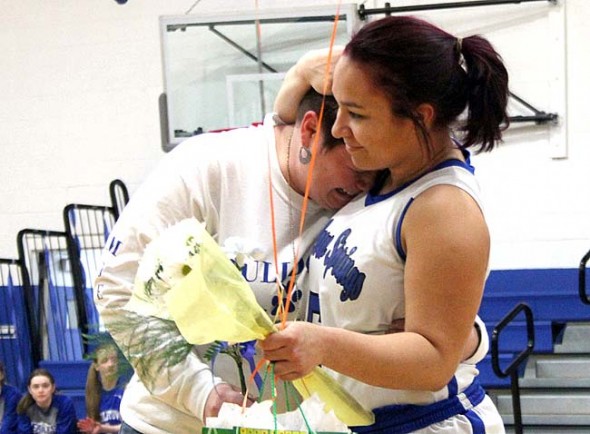 The girls team traveled early Saturday morning to Mason High School. There the Lady Bulldog swimmers placed eighth out of 13 schools with a team score of 90. Olivia Chick brought home two sectional titles on the day. She won the 200-yard freestyle with a time of 1:55.75 and also took first in the 100-yard freestyle with a time of 53.44. Both of her swims were automatic qualifiers for the Southwest District Meet in Oxford this Friday. Chick is seeded second in both events.

“This was the last meet for the team and it was a great season with a lot of team improvements,” said Coach Jody Chick. Both Olivia Chick and Ngqakayi will advance to the Southwest District Tournament with the goal to make it to the State Tournament in Canton.

BASKETBALL
Boys bball lands #3 seed
After a win and loss this week, the 15–5 YSHS boys varsity basketball team secured a number three seed in the district tournament, which starts next week. The Bulldogs are set to finish second place in the Metro Buckeye Conference with a 7–3 league record going into the final league game this Friday.

The Bulldogs cruised past Middletown Christian at home during senior night last Friday, 61–42. Team seniors Cameron Miles, Liam Weigand, Bryce White and Jared Scarfpin were honored in a pre-game ceremony. Earlier in the week, the team suffered a home loss to Catholic Central, 66–63.

Girls team wraps up season
A young girls basketball team wrapped up its season last week with a close loss to Middletown Christian at home. The always scrappy and persevering Lady Bulldogs climbed back from a dismal 15–4 start to put the contest within three points by the start of the fourth quarter. But they ultimately lost 42–40 to finish their season 8–13 (4–8) and in the second-last position in the conference.

Earlier in the week, YSHS breezed by Emmanuel Christian, 52–37, with three Lady Bulldogs scoring in the triple digits. Wright led the way with 17 points, Roberts had 16 points and Smith added 13.

YSHS, a number 11 seed in the district tournament, takes on number five-ranked Xenia Christian this weekend.

Girls receive MBC honors
On Saturday, YSHS sophomore point guard Liz Smith was selected first team all Metro Buckeye Conference for the second year in a row. Smith ended the season second in league scoring, averaging 17.5 points per game, fourth in blocks, with 1.1 per game, fifth in rebounds (7.5 per game) and fifth in steals (3.4 per game).

Senior forward Shanice Wright was selected to the second team all league. She led the conference this season in rebounds, averaging a 9.3 per game and was third in blocks, with 1.2 per game.

Sophomore guard Julie Roberts was selected to receive the Coach’s Award for displaying dedication during difficult times, according to Coach Ralph Grant.

8th graders win tourney game
On Saturday the McKinney eighth-grade boys basketball team defeated Emmanuel Christian in a rematch from earlier in the week and first-round tournament game. The team won 51–42 to move on to the semi-finals of the MBC tournament this Thursday at home against number one seed Xenia Christian.

The Bulldogs began the game with intensity, desire, and focus and led the Lions 13–5 after the first quarter and 23–16 at the half with balanced player scoring. The third quarter saw more balanced scoring with good passing and strong inside work by Potter and Fultz and a 39–28 lead. The Lions then cut the YS lead to six twice in the quarter. With less than a minute to play two big free throws by Elliot Wiggins, a bucket and free throw by Andrew Clark, held off the comeback hopes for the Lions.

“Our inside low post play has been steadily improving and that helps all the other aspects during a game,” Coach Branson Pyles said of the win.

Earlier in the week, the Bulldogs lost to Emmanuel Christian 46–43 at home. Anderson led scoring with 17, Tyreese Benning had 14, Clark scored eight and Kevin Wagner added four. The team also came away with a dominant 52–17 win over Middletown Christian on the road. Clark led the team with 19 points and five assists, Anderson scored 11, Blake Potter had six points and 10 rebounds, and Benning put in six points and dished out five assists.

Playing with the bare minimum of five players throughout the season, Coach Sam Thornton and the persevering squad of Sean Adams, Gabriel Potter, AJ Newsome, Dylan Van Hoose, and Kane Pindell had a dose of humility, a few good wins, and a very entertaining season, according to Coach Pyles.