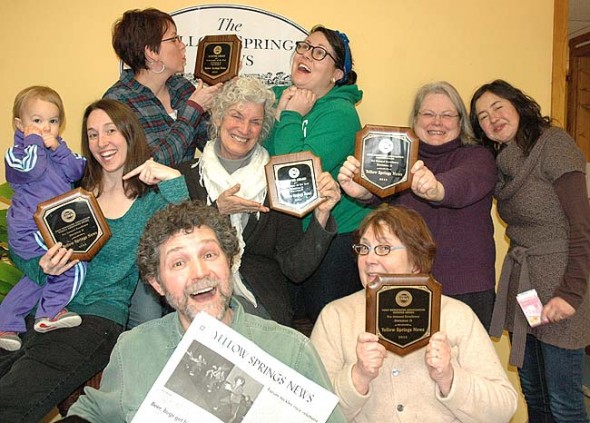 News is tops for a fifth time

For the fifth year in a row, the Yellow Springs News won the top honor in its size category at the annual Ohio Newspaper Association convention. The event took place last week at the Hilton Polaris in Columbus, with about 200 daily and weekly papers represented.

The News won Newspaper of the Year in Class D in the Hooper Contest for weeklies. Class D is for the smallest papers, up to 3,100 circulation; the News has a circulation of 1,700. The Newspaper of the Year award goes to the paper that garners the most awards in smaller categories, and the News won honors in 10 out of 15 possible categories. In most categories, the News competed against 12 papers of the same size, although in some categories it competed against all 55 papers in the weekly contest.

In in-depth reporting, the News won two out of the three awards given (more than one submission was allowed). It won first place for several articles related to the police shootout and death of Paul E. Schenck in July 2013; the articles covered the event and its aftermath, community and neighbors’ responses, mental health training for police officers and the presence of SWAT teams during the event.

According to the judge, the articles were “Very well done. Fair, balanced, personal reporting. Emotional at times, but clearly professional.”

The articles were written by Megan Bachman, Diane Chiddister and Lauren Heaton.

The News also won third place in in-depth reporting for “Eye on our Economy,” an eight-part series that looked at various issues around the economic situation in Yellow Springs. Contributing to the series were reporter Megan Bachman, Chiddister, Heaton and freelancer Carol Simmons.

Regarding the series, the judge wrote, “Incredibly comprehensive. A nice mix of historical detail and present-day examples.”

Megan Bachman won third place for Best Local Feature, for a story on a local teenager dealing with cancer. The story spotlights Chase Barclay, the son of Mills Lawn teacher Dionne Barclay, along with his family and friends. According to the judges, “The piece flows seamlessly from present to past, answering all the readers’ questions as the main character, Team Chase, comes into view.”

In the category of Original Columns, Lauren Heaton won second place for “Middle Ground” columns on the Antioch College farm, and a rift between the school board and administrators. The judge cited the columns as “clearly written and of local interest. She blends opinion and information gained from reporting that make for convincing columns that suggest but do not demand courses of action.”

In sports coverage, Bachman’s story on YSHS golfer Rachele Orme won third place. The judge stated, “Some quality writing and a clean design.” Heaton won third place in the Best News Photo category with a picture of the candlelight vigil following the death of Schenck. According to the judge, the photo “tells a story and portrays emotion. The photo also supplements the story with new and different information.”

News Photographer and Designer Suzanne Szempruch’s photo of a boy and his dog sledding down Gaunt Park hill last winter won second place in the Best Feature Photo category. The judge stated, “This is a classic winter feature photo. You can’t go wrong with a kid sledding and playing with his dog.”

The News won first place in the category of Special Edition for the 2014 Guide to Yellow Springs, which focused on wellness in the village. According to the judge, “… the professionalism of the writing and photography is evident. Overall, a very impressive effort for a newspaper of any size.”

In the category of Community Awareness, the News won third place for its “Eye on the Economy” series. The judge stated, “This series helping readers understand the local economy is well-reported and used data to show changes taking place.”

The News also won second place for its website, which is a joint effort with contributions by Minde, Szempruch, Shows, Bachman, Heaton and Chiddister.