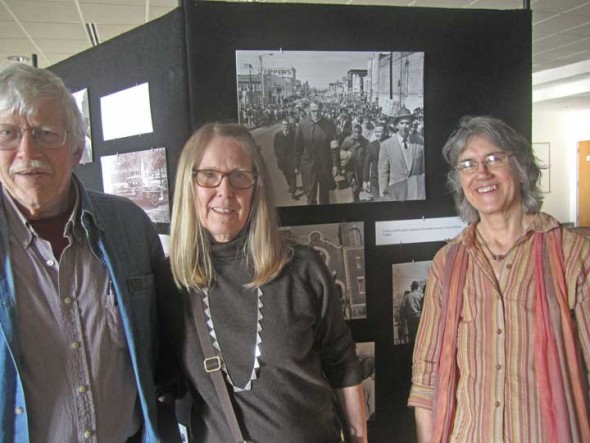 Patti Dallas was recently surprised to find a photo of her father, Meredith, in an Asheville, N.C. exhibit of the work of James Barker. The photo showed Dallas at the historic civil rights march in Selma, Ala. Dallas is shown with Barker and his wife, Robin, the sister of villager Jim Bailey.

During an extended visit to Asheville, N.C., villager Patti Dallas attended a photo exhibit of pictures taken at the famous 1965 civil rights march in Selma, Ala., and was surprised to see her father, Meredith Dallas, in a photo. Several in the Dallas family, including Patti and his sister Wendy, along with parents Willa and Meredith, had attended the march.

Adding to the coincidence, Robin Barker, the wife of the photographer, James Barker, is the sister of villager Jim Bailey. Patti Dallas spoke to the couple at the exhibit. To see more of Barker’s photos, go to jamesbarker-photography.com/selma.

The film “Selma” will play tonight at 7 p.m. at the Little Art Theatre, ending its week-long run.