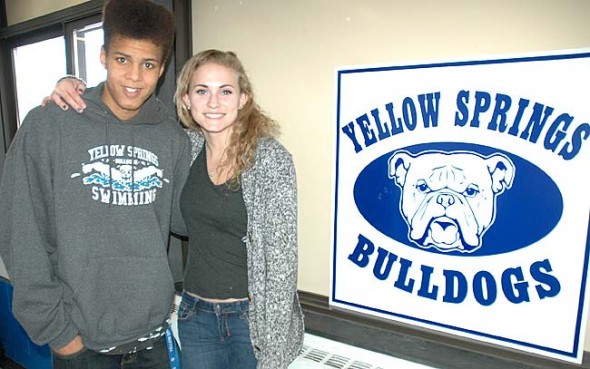 Olivia Chick and Aman Ngqakayi will swim at the state swimming finals in Canton this week. Chick, a sophmore, is returning to states to improve on her eighth-place finishes in the 100- and 200-yard freestyle. Ngqakayi, a junior, qualified for states for the first time and will swim the 100-yard freestyle and breaststroke. (Photo by Megan Bachman)

The day after medaling at districts and qualifying for state, Yellow Springs High School swimmer Olivia Chick was back in the water. At club team practice that day she swam 7,000 yards — over four miles. Not only is the sophomore preparing for her repeat appearance at the state swimming finals this week, she is gearing up for a national club swimming competition later this month. As a result, she hasn’t had a day out of the pool in three weeks.

But for Chick, the pressure of the state finals is balanced by the support she gets from her teammates, friends, parents and school.

“There is pressure, but I also get more support in high school swimming,” Chick said.

Fellow swimmer Aman Ngqakayi was focused this week on the concept of “taper” — the swimming term for cutting time. It will be the junior’s first appearance at states finals, and while he dropped an incredible five seconds in one event between sectionals and districts, he’s set on getting faster so he can make the final heat of the biggest stage for high school swimming. So far, his hard work has paid off in the face of questions about whether he could do it, he said.

“People were saying ‘you can make state, but will you?” Ngqakayi said.

Ngqakayi and Chick will swim at the Ohio High School Division II State Swimming Finals on Thursday and Friday at the C.T. Branin Natatorium in Canton. Chick takes the pool as the sixth seed in both the 100- and 200-yard freestyle. Ngqakayi is seeded 11th in the 100-yard breaststroke and 23rd in the 100-yard freestyle. Both hope to return to YSHS with medals, which are awarded to the top eight finishers.

Chick earned a pair of medals at state last year as a freshman, with eighth-place finishes in the 100- and 200-freestyle. But now she sees that result as “lucky,” and the pressure is building to make it further up the podium. A state title is her real goal, she admitted, one that she is getting closer to.

Chick said of the sibling rivalry that there is some teasing, but that she is grateful to have watched from the stands as her sister competed so many times.

“I never thought this would be me someday,” Chick said. “But I have learned [from watching Erika] that you will have bad days, and you will do better.”

Ngqakayi, YSHS’ lone male swimmer, went into districts with high expectations and swam as aggressively as he ever has, setting a new school record in one event and shaving five seconds off his sectional time in another. In the 100-yard freestyle, Ngqakayi jumped out to an early lead and improved on his own school record in 48.64, while in the 100-yard breaststroke, he “just went for it,” finishing with another personal best.

Ngqakayi barely made it to the final heat in the freestyle, and in the end finished 11th with his 48.64 swim. Ngqakayi went on to bring home a bronze medal in the 100-yard breaststroke, an impressive feat considering that he was in the second-to-last final of the event. Ngqakayi swam three seconds better than his previous best and five seconds faster than his sectional swim, and his aggressive tactic paid off, he said.

“I was like, ‘Just go as fast as you can and make sure your form is good,’” Ngqakayi said. “It really paid off — I went faster than I expected.”

Looking to state, Ngqakayi is hoping to get past preliminaries to the A final, which will be broadcast on television — an extra incentive to swim well. When not swimming in high school meets, Ngqakayi is a member of the Springfield YMCA family team.

Chick swims with the competitive national club team the Dayton Raiders, practicing eight to nine times per week during the season. In addition to her own stellar swims, the highlight of the season has been the success of the YSHS girls swim team, which came in second this year in the Metro Buckeye Conference after many years at the bottom of the table. While all eyes are now on Chick as the last female swimmer standing, Chick is already looking forward to the team season next year.

“Next year we can win our conference meet,” she said.