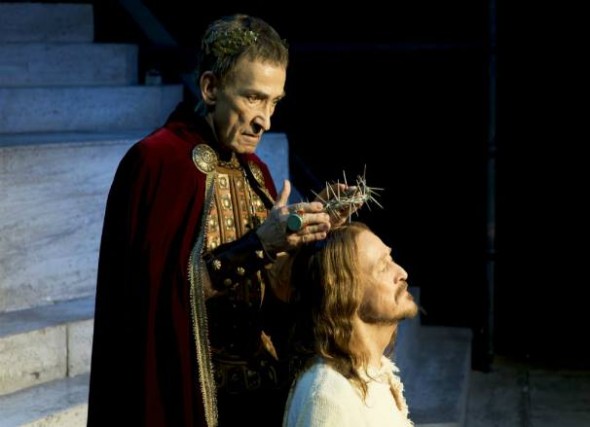 Barry Dennen, as Pilate, places the crown of thorns on the head of Ted Neeley, as Jesus in a stage revival of "Jesus Christ Superstar." Both Dennen and Neeley will be in Yellow Springs March 27–29 for screenings of the film and Q&A at the Little Art.

The Little Art Theatre will host screenings of classic 1973 rock opera film “Jesus Christ Superstar” Friday through Sunday, March 27–29. The three-day event will feature Q&A from actors Ted Neeley and Barry Dennen, who played Jesus and Pilate, respectively, in the film. The stop in Yellow Springs is part of a nationwide screening tour showcasing the restored digital print of the film, and allowing fans to meet Neeley and Dennen, as well as other cast members in select cities.

“Jesus Christ Superstar” began its life as a rock opera album, with lyrics and music penned by stage legends Tim Rice and Andrew Lloyd Webber. When the album was later developed as a stage production, Ted Neeley, who had previously starred in “Hair,” auditioned for the Broadway production — as Judas. The part of Judas went to Ben Vereen, however, and Neeley was cast as understudy for Jesus. Neeley took on the title role in the stage play’s Los Angeles production, and was cast as Jesus in the film soon after.

Over the 42 years since the film was produced, Neeley, along with several of his fellow film cast mates, has continued to portray Jesus on the stage in revivals of “Jesus Christ Superstar.” Most recently, Neeley finished up a year of performing “Jesus Christ Superstar” on stages across Italy at the end of February.

On Wednesday, March 4, Neeley spoke with Lauren Shows via Skype audio about his experiences with the film and the play and what playing Jesus for 40 years has meant to him, among other things. Listen below.

A full story on the Yellow Springs screenings will appear in the March 15 issue of the News. For more information on Neeley and the 2015 screening tour, visit http://www.tedneeley.com.

(Psst, Superfans: if you’d like to hear the full, unedited interview, listen up below via SoundCloud.)