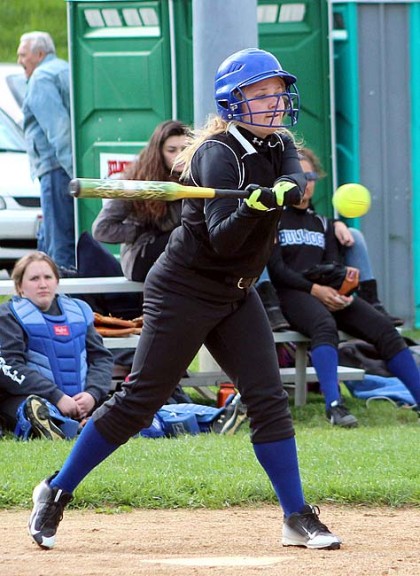 Last week’s baseball schedule began with two tough losses to Metro Buckeye Conference powerhouse Dayton Christian. The Bulldogs braved the gusting winds but could not overcome the onslaught of hitting by the senior-laden Warriors.

The Bulldogs were anxious to defend their home turf in a rainy Saturday morning matchup with Trotwood on April 25. Bulldogs starter Aakeem Truss worked hard to keep the mud off his spikes and the Rams off the base paths. The Rams pulled ahead early with two runs in the first, but Truss settled in and the Bulldogs came alive. Head Coach Ben Cooper got the boys to the field early and ensured they were mentally and physically ready for the game. This strategy paid off as third base/hitting coach Kelly Dunn kept the Bulldogs running as they built a 12–2 lead with patience at the plate, good hitting and aggressive base running.

The Bulldogs’ focus waned as the cold rain fell at an increasing rate. This allowed the Rams to push two more runs across the plate, deferring a run-rule by the Bulldogs. The coaches and fans pleaded with the Bulldogs to come up with two more runs in the bottom of the fifth inning to seal the victory and allow everyone to dry out and get warm. The Bulldogs did just that with timely hitting by senior Liam Weigand in the final frame. Truss came away with his second complete game win of the season supported by strong defense from his infield of Weigand, Donnie “Baseball” Isenbarger, Tony Marinelli, JT Clark, and his backstop Devon Perry.

The now three wins on the year for the Bulldogs equals their victory total for the last two years combined. Coach Cooper said this week he is thrilled with the direction of the program as evidenced by the number of players, their commitment to the team, and the victories.

“We’re having fun and learning something every day — coaches and players,” Cooper said after the latest win.

On Monday evening, April 27, the Bulldogs traveled to the Athletes In Action facility to face another conference foe, the Xenia Christian Ambassadors. Senior Jared Scarfpin took the mound for the rematch of an earlier season game. Scarfpin gave up only two hits over his six-inning stint as he moved the ball around the strike zone at will. A couple of untimely errors cost the Bulldogs dearly as the Ambassadors plated three runs. The Bulldog bats were virtually silent with only a hit by Liam Weigand and two by JT Clark until the seventh inning.

Zach Brintlinger-Conn began the final inning with a pinch-hit rope on the first pitch he saw. Tony Marinelli followed with a great at bat, fouling off pitch after pitch until finally succumbing to a strikeout. After a second out, Eric Romohr stepped into the box as another pinch hitter. Romohr ripped a double, scoring Brintlinger-Conn. Scarfpin was next and knocked in pinch runner Clay Cooper as the Bulldogs closed within one. Scarfpin used his speed to steal second and third, putting the Bulldogs into position to tie the game. Isenbarger worked a full count before flying out to end the game.

Track and field athletes dislike three weather combinations — cold, heavy rain and wind — and unfortunately all three of those elements came into play last Saturday, April 25, at the Southeastern Invitational. Two notable highlights were the first place finishes by Charlotte Walkey, with a wire-to-wire victory in the 800-meter run, and the 400-meter relay team of Christina Banks, Dymeisha Banks, Olivia Brintlinger-Conn and Julian Roberts, with a narrow victory.

In other results, Kaner Butler was the runner up in the 110-meter hurdles, in 16.79 and the boys 800-meter relay team brought home third place in 1:40.8. Running in that race were Cameron Miles, Bryce White, Heikiem Foy and Ed Johnson. Julian Roberts achieved a fourth-place finish in the 100-meter hurdles, in 18.55 seconds, while Amani Wagner’s shot put flew to 30´5.5˝ and her discus toss went 69´6˝, good enough for fifth place in each event. Jasmine Davidson heaved her shot put 30´2˝ to finish in sixth place.

It was a busy week for the Yellow Springs girls softball team as they played two games against three-time MBC defending champion Dayton Christian to start the week. The Lady Bulldogs lost by scores of 11–0 and 17–2.

First baseman Chelsea Horton continued her hitting streak with two singles and a home run against the Dayton Christian pitcher. YSHS pitcher Jesi Worsham continued her workhorse ways as she pitched a complete game in both games, including a four-hitter in the first game, and she also contributed to the offense as she got on base twice and had three stolen bases and a double for the Bulldogs.

“Jesi’s an all-league-caliber talent at shortstop so we miss her presence there, but she has definitely stepped up for this team and filled the gap at pitcher when they needed it,” Coach Jimmy DeLong said this week.

The Bulldogs then traveled for a doubleheader against Greeneview, Saturday, April 25. The Bulldogs jumped out to an early 3–0 lead in the first inning when they strung three straight two-out extra base hits by Chelsea Horton, Danny Horton, Nekyla Hawkins and a single by Evelyn Greene to produce the runs. The team lost the first game 15–5, but Coach DeLong was encouraged by the game.

The Bulldogs defense, which was error free on Saturday, has also been strong. In the second game against Greeneview, the Bulldogs took a 2–0 lead and trailed by a score of 3–2 when a rain storm arrived and the game was called.