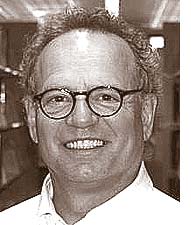 David A. Berona returned to Ohio this past September with his wife, Rose O’Brien, after 35 years of life in New England. They made their home in Yellow Springs. David retired after being diagnosed with a malignant brain tumor and lived in comfort at home until his death on May 25.

David was a historian of the illustrated book and an authority on the woodcut novel. He authored “Wordless Books: The Original Graphic Novels” (2008), a winner at the 2009 New York Book Show and a Harvey Awards nominee. He selected and edited “Alastair: Drawings and Illustrations” (2011) and Eric Gill’s “Masterpieces of Wood Engraving” (2012) and was the guest editor of CSP’s “The California Printmaker,” “Storytelling and Printmaking,” in 2006.

David has juried and curated print exhibitions and presented numerous papers on woodcut novels both nationally and internationally. He was the dean of the library and academic and support services at Plymouth State University, N.H., and a member of the visiting faculty at the Center for Cartoon Studies.

David is survived by his wife, Rose, brother Dan and sisters Diane and Debbie. There will be a celebration of David’s life at a future time. Donations can be made to the Ohio State Billy Ireland Library and Museum. Arrangements by Conroy Funeral Home.