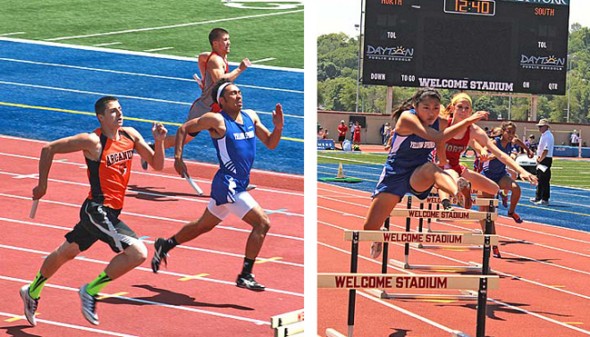 YSHS track and field athlete Ed Johnson sprinted the last leg of the 4x400-meter relay at last week’s district meet. Johnson helped his team clinch third place and qualify for regionals with a time of 45.78 seconds. Olivia Brintlinger-Conn cleared a hurdle on her way to a regional qualification last week. At the high school district track and field meet, Brintlinger-Conn finished fourth in the 300-meter hurdles in 49.53 seconds to advance to regionals. (Left photo by Tim Sherwood; right photo by Jesi Worsham)

The Yellow Springs High School track and field team performed well at this weekend’s regional meet, though no athletes advanced on to state. Leading the way were junior Kaner Butler and sophomore Julie Roberts, who both excel in hurdles.

In the 110-meter hurdles Butler finished in sixth in 15.97 seconds, just half a second and two places shy of qualifying for state. He scored three points in the effort. Butler also made it to the finals in the 300-meter hurdles, finishing in seventh in 41.56 seconds for two more points.

Julie Roberts ran the 300-meter hurdles to a seventh-place finish in the event finals. Though the top four made it to states, Roberts scored two points for her team in the race.

Butler and Roberts were the only Bulldogs who scored for their teams, singlehandedly giving them a 37th (boys) and 31st (girls)-placed finish.

in other events, the boys 4×200-meter relay team (Cameron Miles, Bryce White, Joe Plumer and Ed Johnson) finished in 1:34.89 in the preliminaries, not quick enough to make the event’s finals.

Meanwhile, the boys 4×100-meter relay squad of Aaron Sherwood, Bryce White, Cameron Miles and Edward Johnson of came in 45.44 seconds in the preliminaries, barely missing a chance to run in the event’s finals.

Read the June 4 issue of the News for the full story.