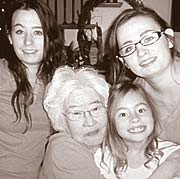 Ikuko “Iko” Wright, née Orimo, passed away peacefully on April 28 in a care facility near her only daughter, Larina (Wright) Benson and family. Born in Tokyo in 1926, she survived the bombings of WWII by evacuating with her Japanese, Christian family to the northern mountains of Gumma Prefecture. After the war, she spent a great deal of time in both the U.S. and Europe during her marriage to Lt. Col. Charles Dickey III.

At one time, she studied music at the Westminster Choir College in Princeton, N.J., where she specialized in voice, a talent she developed while singing hymns at church in Tokyo. All her life she could entertain friends and family with her life stories and international songs. She also lived in France for three years where she learned the language and studied the art of cooking and French literature. 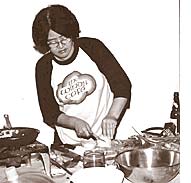 Ikuko Wright at the Winds

Back in Japan, in the early 1960s, she met Harold Wright, and together they participated in poetry circles in Tokyo. They later married and lived in Columbus, where Harold taught Japanese language and literature at Ohio State University. During this time, Larina was born in Gumma Prefecture, Japan. Eventually, though no longer married, Iko and Harold remained close friends and separately moved to Yellow Springs where Harold began teaching at Antioch College. Iko may be remembered by many as one of the original owners of the Winds Cafe and later as chef-owner of Iko’s Harmony Café in the Oten Gallery.
After Larina graduated from Yellow Springs High School, she began to work in the fashion industry in Tokyo. Iko soon followed and often lived near her daughter for the rest of her life — in places such as Japan, southern California, Las Vegas and most recently the mountains of Utah.

Iko’s greatest enjoyments in life were travel, playing games and cooking for others. Her most endearing traits included her warm generosity and great sense of humor which will be deeply missed. Iko, better known as “Koko” to her three granddaughters is survived by her sister Eiko Nishi, her daughter Larina (Rina) Benson (and husband Robert), step-daughter Rose Wright and granddaughters Lauren Caldwell, Tessa Caldwell and Aliya Benson, as well as many loyal and admiring friends.

In lieu of a funeral, Iko preferred we celebrate her life with a toast.