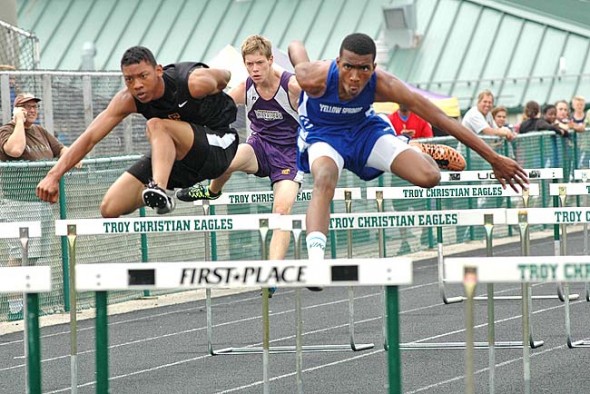 Kaner Butler swept both the 110-meter and the 300-meter hurdles at the Metro Buckeye Conference track and field meet on Saturday, May 16, at Troy Christian, where the Bulldogs finished third and the YSHS girls team took second place. (Photo by Lauren Heaton)

Danny Horton and Kadie Lafferty got base hits, Hannah Morrison pitched a complete game, allowing only five hits and four earned runs, and Jesi Worsham and Chelsea Horton played sparkling defense, but it wasn’t enough and the YSHS Bulldog softball team lost to perennial softball power Southeastern in a sectional tournament game by a score of 10–0.

In spite of the loss, the game was a dramatic improvement from last season’s match up which was won by Southeastern 26–0.

“After last season’s lopsided loss, our team really surprised the Southeastern team and the fans with our competiveness this year,” Coach Jimmy DeLong said.

The game had its moments. Senior first baseman Chelsea Horton showed off her defensive skills when she sprinted to the Southeastern foul territory dugout fence to snare a pop up on the run. Senior shortstop Jesi Worsham was flawless on defense with several ground-ball and pop-up fielding chances and showed off her rocket arm when she ended a fourth inning rally with a charging off balance strike to first base to get the out and save a run.

It was the last game of the season, and with 10 freshman and sophomores on the team, the anticipation for next season has already begun.

“lt be a fun team to watch next year,” DeLong said.

For the second year in a row the young YSHS girls squad, which only has one senior, achieved a runner-up finish at the Metro Buckeye Conference meet. The boys team earned a well-deserved third-place league finish. Performances and efforts were the rule of the day as the squads continued their attitude of “team first.”

Winning their events were ninth-grader Jasmine Davidson, who sent the shot put 32’3.25’’, 10th-grader Julian Roberts, who finished the 300-meter hurdles in 48.15, a personal best, 11th-grader Dymeisha Banks, who reached a season high of 4’6’’ in the high jump and the 1600-meter relay team of Roberts, Banks, Charlotte Walkey and Olivia Brintlinger-Conn, which finished in 4:32.45.

In the boys meet, Kaner Butler brought home two golds, winning the 110-meter hurdles in 15.86 seconds and the 300-meter hurdles in 40.53 seconds. Joe Plumer was victorious in the long jump, leaping to 18’3.75’’. And the 400-meter relay squad of Aaron Sherwood, Bryce White, Cameron Miles and Ed Johnson won its event in 46.10 seconds.

The McKinney girls track team finished as runners up at this year’s MBC conference meet. The boys placed third.

Stacia Strodes placed second in the girls 200-meter race in 30.23 seconds as well as in the long jump with a leap of 13’0.75’’. Jude Meekin placed second in the pole vault with 5’6’’ after a dramatic jump out for first place. The girls 4×200-meter team (Ranard, Bryan, Baxter, Strodes) missed the win by only one-tenth of a second in a head-to-head race. Their second place time was 2:06.57.

The 2015 YSHS baseball season came to a close last week in a season marked by 10 poor weather games and 10 rainouts. The Bulldogs earned their way to the Division IV sectionals for the second year in a row. But this year would be different for Coach Ben Cooper’s young team as they came into the game seeded 12th and matched against their Metro Buckeye Conference rival, the Xenia Christian Ambassadors. Last year’s quick exit against top-seeded Arcanum was but a distant memory as the confident Bulldogs took the field at Athletes In Action’s Grady Field.

The Bulldogs got off to an uncharacteristically slow start by going down in order in the first. Undeterred, senior Jared Scarfpin toed the rubber for his third start of the year. The Ambassadors came away with one run that could have been more, if not for a fine defensive play by outfielder Zack Brintlinger-Conn. The Bulldogs put two of their own on the board in the top of the second with hits by Aakeem Truss, Donnie “Baseball” Isenbarger, and Brintlinger-Conn. The Ambassadors battled hard to also plate two in the second frame.

The next two innings saw the Bulldogs get two and three runs as Scarfpin settled in and kept the Ambassadors at bay. Another hit by Truss as well as hits by Ethan DeWine, a great sacrifice by Isenbarger, followed by hits from Tony Marinelli, Liam Weigand and Scarfpin, moved the Bulldogs ahead of the home team for a 7–5 lead.

JT Clark came in to relieve Scarfpin for the remainder of the contest. The Bulldogs scored another run in the top of the final frame with hits from Clark and Isenbarger. Clark took the mound for the final inning with a three-run cushion. The seventh started well for the Bulldogs with Clark shutting down the first two hitters. Down to their last out, the Ambassadors made a valiant effort and were trailing by one run with a runner on second base. The number three batter for the Ambassadors worked a 2–2 count when Clark reached back and fired it past him for strike three. The Bulldogs had won in the bottom of the seventh and sealed the first tournament victory since 2008!

The celebration and the number-one seeded Newton Indians were too much to overcome the next evening at the Indian’s home field. The Bulldogs struggled in the field and at the plate to support a superb pitching performance by Truss. The Bulldogs gave it all they had but, in the end came away with a loss but the knowledge that they now know what it takes to win in the tournament and exactly what they need to work on for next year.