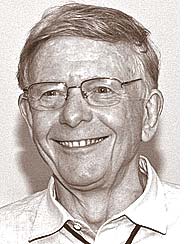 Roger Millard Husbands died in his home on May 22, 2015, in Yellow Springs, due to complications following lung and pancreatic cancer. He was 74.

Roger was born on Aug. 7, 1940, in Salt Lake City, Utah, to Munroe and Martha Husbands, and grew up in Needham, Mass. He attended Antioch College from 1958–1964, studying mathematics. During college, he married Harriet Odinov, also a student at Antioch.

Roger lived an unconventional life, although it seemed to begin ordinarily enough. Roger and Harriet moved to Seattle with their infant daughter, and he pursued a career as an actuary. But the times they were a-changin’ and by the early 1970s, Roger had left that position to follow his dreams. Over the next decade, he grew his hair long, divorced, worked in a health food co-op, managed a band (Fruitland Famine Band/The Enemy/Big Fun) and a punk rock club (The Bird). He raised his kids at the same time. Those were crazy years.

When it became evident that the music business was not his future, he moved back to Boston, Mass., to support his parents in his father’s last years. He spent the next several years building a career as an executive recruiter, and eventually hung his shingle as Roger Husbands and Company. Over the years his role evolved from recruiter to career advisor and life coach. He continued working with clients in this capacity until the last months of his life.

Around the turn of the century, Roger began to actively explore the concept of community. He traveled the country, videotaping organizations and organizers, ultimately moving to Middletown, Calif., where he joined the Harbin community (and got back to his hippie/new age roots). During his time there, he founded Cultural Imperative, dedicated to helping medical institutions navigate the pitfalls of language and culture.

At this time he was increasingly engaged with the Bay Area chapter of the Antioch Alumni Association. He was highly involved in the reopening of the college, repeatedly returning to Yellow Springs, bringing his management skills — and his floor-laying skills. It is disappointing for everyone that he was unable to attend the graduation this year.

During his time as an entrepreneur in the Bay Area, Roger had connected with Impact Hub, a community-focused organization that connects and supports entrepreneurs. Roger saw synergies between Antioch/Yellow Springs and Impact Hub, and worked to establish a Hub in Yellow Springs. This triggered his move to Yellow Springs in 2013, making it his final home. Here he built a strong community of friends, who were there for him until the end.

Roger lived on his own terms, making choices that were often unconventional. Many people have said that he made a real and meaningful difference in their lives. He felt compelled to help others, and was grateful when he knew he had made a difference.

He leaves his son Andy and Andy’s wife Rice Wales (they were wed on May 31), his daughter Sorel, her husband, Jonathan Denholtz, their daughter Tessa, his sister Bobbie Alicen, and her children and grandchildren. He also leaves beloved cousins, especially Kirsten Petersen and family. Special friends are Alan Siegel, Godfrey Perrott, and Frances Trobiner, and their families, as well as more people than can be named, from his Zen practice, the Ridhwan school, the Antioch alumni association, the World House Choir, the Unitarian Universalist community, all of whom have been generous with kindness and support in this difficult time.

The family would like to thank Crossroads Hospice for their support and care. And a special thank you to Kirsten Petersen, Alan Siegel, and Matt and Karen Denman for their very real support during Roger’s final days.

A service to remember and celebrate Roger’s life is scheduled for June 21, at 2 p.m., at the Foundry Theatre at Antioch College, with a reception to follow. Katie Egart will lead the service. All are welcome to attend.

Roger had hoped to visit the Washington coast this summer. This was a place that was very special to him. The family plans to return his ashes to that spectacular and beautiful place.