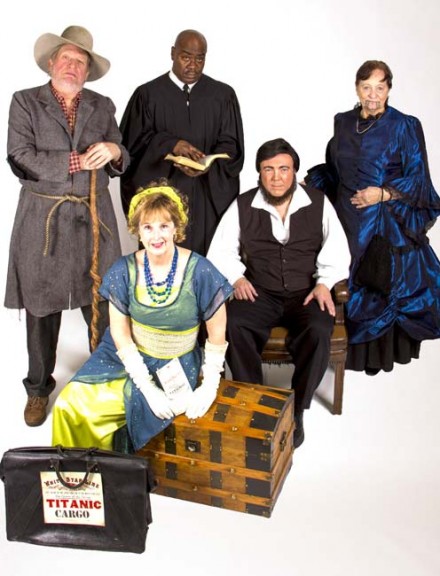 Martin Luther King Jr.’s messages of nonviolence, equality and social justice have been taught and recited  for many decades around the world. Yet last week’s murder of nine African Americans at a church in Charleston, S.C., is a grisly reminder that the goals of the civil rights movement that King and others worked so hard to achieve are not all won. That tension, according to Martin Jefferson, who will portray King in an Ohio Chautauqua performance next week in Clifton, is an indication that King’s words still need to be heard.

“The message is as long as there are threats to justice anywhere, [King’s] message will always be there to remind us that the work is not yet done,” Jefferson said in an interview this week. “[King] encouraged us to reach to be the best of who we are, and in these times, especially, it needs to be heard.”

Jefferson chose King for the historical reenactment tour only after being cast in several plays about King (“Road to the Mountaintop” by Ron Milner and “The Meeting” about King and Malcolm X) and studying extensively about his life and writings. Having acted, directed and taught for 30 years, he still feels humbled to play a “character of such magnitude,” he said. But each summer for the past decade, Jefferson has brought King’s words to life to pique listeners’ interest and encourage them to investigate the past more closely.

Jefferson will perform as King during a period from 1965 to 1967, when he was perhaps less popular, due to his opposition to the Vietnam War and commitment to nonviolence in the face of continuing economic disparity between blacks and whites. He joins four other actor-scholars who will animate the “Journey Stories” of historic American figures each evening next week, June 30–July 4. The daytime events include workshops on each figure and their historic period presented at local libraries and museums, including the Yellow Springs Library on June 30. The evening performances take place under a big tent on the Clifton schoolhouse lawn, with music concerts beginning at 6:45 p.m. and performances beginning at 7:30. Mobile food vendors will also be available for dinner and snacks. See the full week’s schedule at ysnews.com.

King’s theories of nonviolence were heavily influenced by another of this year’s Chautauqua figures, Henry David Thoreau, the 19th century poet and author of “Walden” and many essays on civil disobedience and the natural world. Thoreau, played by Anderson University English Professor Kevin Radaker, wrote liberally on the restorative powers of man’s proximity to the earth and the woods. Radaker as Thoreau will speak about his essays in “The Maine Woods,” and his Cape Cod writings, known to some as the best exposition on the flora, fauna and people of the Massachussetts peninsula.

The Chautauqua also brings to life the voice of Olive Oatman, who at the age of 14 was captured by Tolkepaya natives as she and her family were travelling through Arizona to join the Brewsters (a Mormon sect) in 1851. In the narrative told by naturalist Dianne Moran, most of Oatman’s family was killed, but she and two younger sisters were sold to the Mohaves, with whom they lived as tribal members for four years before their brother was able to trade them back.

In about the same period and area of the country, a cartographer and draftsman named Joseph G. Bruff was also travelling west, to California in search of gold. Bruff, played by writer and historican Hank Fincken, leads a wagon train from Washington, D.C. to the Sierra Nevadas, where he becomes too sick to continue. The performance is full of stories that highlight details of the era — the effects of cholera, the fear of Native Americans, the lack of women who ventured West, the value of money. But in particular, Fincken finds in Bruff’s story a fundamental curiosity about the world, which he believes is what truly drove Bruff as a pioneer explorer.

“Joseph Bruff was a Renaissance man — he studied the plants and animals, sketched gophers, deer and a buffalo hunt, which was a dream as far as he was concerned because he’d never done it before,” Fincken said in an interview this week. “He’s an Every Man, with an optimistic view who thinks everything will work out.”

Abandoned by his party in the Sierra Nevada Mountains, Bruff wrote in his diary, “I am too philosophical to give up and die.” So he turned his camp into a sort of hotel for stragglers, whom he cared for as they went by, Fincken said.

Finally, Debra Conner will perform the role of Titanic survivor Edith Rosenbaum Russell, a Cincinnati native who boarded the infamous ship in Cherbourg in 1912 and became one of the 710 survivors of the sinking disaster. Though Russell is not based on any of the characters in James Cameron’s 1998 film, the movie does provide context for the experience. But what Conner finds compelling about Russell is the sense of humanity she is able to share both during and after the tragedy. The item she retrieves from her cabin, for instance, before boarding one of the last lifeboats, is a musical stuffed pig. She plays the pig for her companions that night to give them hope, she would later recount in the many interviews and accounts she gave of the event. At the end of her performance, Conner invites her audience to think about being a survivor who was saved for a reason, as Russell believed she was.

“The Chautuaqua is designed to be entertaining, but there should also be something of value the audience leaves with — an awareness of what it was like to travel the California Trail, risk capture by Indians…” and voyage on the “ship of dreams,” she said.

The Ohio Chautauqua is sponsored by Ohio Humanities. The tour stops for a week in each of four cities through July 11, including Chillicothe, Akron, Clifton and Coshocton. For more details, go to OhioHumanities.org.