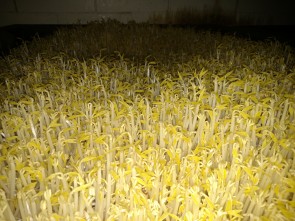 BLOG — 9000lbs of sprouts: interview with a bean sprout proprietor

Randy has been growing bean sprouts for more than thirty years at Spring Valley Farm, the farm he and his dad operate outside of Xenia. I helped him with some roofing on one of the buildings there, not knowing what kind of operation he had going. When he told me he grew nine thousand pounds of bean sprouts per week, I was floored. How does someone grow four and half tons of sprouts per week? What kind of operation is needed to grow such an niche product? How would one even get into the sprouts business? He was kind enough to let me interrogate him about the business of sprouts, and this is what he had to say: 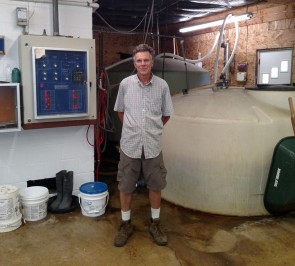 In 1982 I was just getting out of the Peace Corps. My dad had bought a farm wanted to do something with property. So we decided to go into business together. He bought the farm originally to grow grapes but that didn’t pan out. At the time, we thought that to really promote your wines you had to have a festival, and that would mean you had to bring thousands of people here for a wine tasting. It was a major thing that we didn’t want to do. So we built a greenhouse and started growing herbs, tomatoes, watercress, European cucumbers. There was an emerging market for hydroponic lettuce so we started growing lettuce hydroponically. Every year we added a greenhouse and pretty soon we had 20,000 square feet of produce.

We sold produce wholesale. There’s a big produce market around, especially in Cincinnati because of the river. There’s an established warehouse district there. We knocked on doors and did cold calls. We were supplying the Meijer chain for a while. And then one of our alfalfa sprout growers lost their supplier and wanted a replacement and asked if we knew how to grow alfalfa sprouts. We didn’t but of course we said yes anyway. (Laughs) 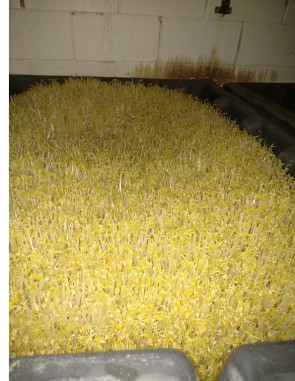 Peering into a bin: what seems to be a billion bean sprouts. A prize to whoever correctly guesses the amount!

We tried to build our own equipment and grow sprouts in the greenhouse, but it just didn’t work out. Months later we bought the right equipment and did it the way it really needs to be done. The alfalfa sprouts are grown in a large rotating drum. You add water and light, and they green up after a few hours. You load in about 80 pounds per drum, and you get about a 10- 15:1 ratio after about five days. They were used primarily for salad bars, sandwich shops.

The green sprouts (alfalfa) business declined. A lot of the chain grocery stores dropped green sprouts – the green alfalfa sprout has an inherent problem with salmonella and E.coli. The structure of the seed has more crevices for bacteria to hide. We got out of alfalfa ten years ago but alfalfa sprouts led to us see the market for bean sprouts. The bean sprout market is pretty good – a lot of Asian markets and grocery stores.

Bean sprouts are a highly perishable product so there aren’t a lot of growers around. They can’t bring a decent bean sprout in from another state without paying huge shipping costs, so it favors the local grower. You want to get them sold within two days of harvest, and they need to be consumed within 10 to 14 days. I think the distributors we use ship in some sprouts from Chicago and I know there’s a grower in Columbus, but he only has a few sales in Dayton.

The process we use is unique to bean sprouts. The equipment we have is specifically for growing them. We’ll load up 110 pounds of seeds in a 3’ x 4’ x 4’ bin. The bean seeds themselves come from China. I don’t know why – maybe they grow the best beans? The bins are in a dark room and we spray them with water every two hours. We do a test and send it to a lab in Cincinnati twice a week to test for E.coli and salmonella to make sure the product is safe. We have a recycling system that cleans 80 percent of the water we use. The beans sprout on the bottom and push successive layers to the top. Kind of like they’re in dirt. On the sixth day of the process, we process them, package them, and put them in a cooler. We ship them on Mondays, Wednesdays, and Thursdays. We sell about 9000 pounds per week. It’s an amazingly big market. (Laughs) And that’s just the Dayton and Cincinnati area.

(Let me interject and say that a bin full of fully sprouted sprouts is totally surreal – the bins are four feet tall and are completely, completely packed with sprouts. You can reach your hand in and it’s this weird tangle of dense but loose sprouts with seemingly no end. They are so dense that you could probably walk on them. The bins are in a dark, damp room, and standing on a bucket and peering over the top into a bin and seeing an ocean of yellow-green fibers makes for a really odd sight. Not to mention that if you opened the vertical door on one of the bins, a few hundred pounds of sprouts would avalanche out and cover you in their watery, earthy essence. Maybe I’m just used to seeing them in small cartons in grocery stores, so the sheer amount of sprouts in one place is hard to process, not to mention that this is just one of seven bins. – DTL) 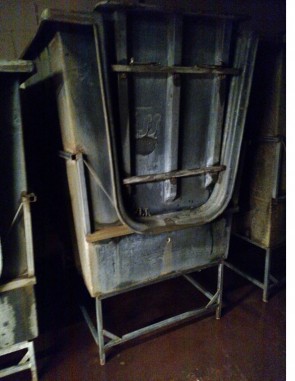 This bin holds hundreds of pounds of sprouts at a time. The picture above is the top of this bin. Randy’s operation produces seven bins full of sprouts per week.

It’s been a nice business. It’s profitable, the market’s consistent, and it grows. But it takes a lot of commitment. Someone has to be here every day to check on them. We have alarms for malfunctioning pumps In fact, the most catastrophic event we experienced was when the computer that controls the watering cycle broke down last winter. I had to come in every two hours for a whole week and push the watering server bar over the bins by hand. I had help doing it during the day but I had to stay overnight every night and get up every two hours to do it. That’s the thing about small businesses – you make enough to survive, but a lot of times you don’t make enough to pay a manager to take responsibility for things. (Laughs) The responsibility comes back to me.

I graduated from college with a degree in Zoology. I had never even tasted sprouts before we started. In the Peace Corps I was raising fish – it was a kind of farming, but I really had no experience with growing. I learned my business sense along the way. Raising sprouts isn’t something I ever saw myself doing, but isn’t that how most people end up in life – not really doing what they thought they were going to do?

Next week: Next week: kicked in the funnybone – the ups and downs of a burgeoning stand-up comic (for real this time).

One Response to “BLOG — 9000lbs of sprouts: interview with a bean sprout proprietor”