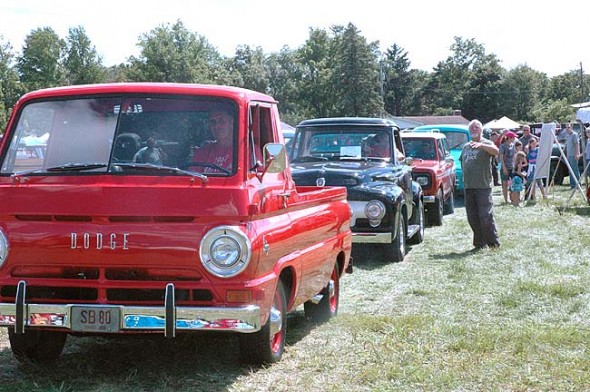 Organizer and publisher Patrick Ertel bids farewell to a few of the vintage trucks at the 14th annual vintage truck show last Saturday, Aug. 1, at Young’s Dairy. His magazine Vintage Truck hosts the event, which draws truck enthusiasts from across the country. Over 150 trucks were exhibited, from antique firetrucks to pickups to military transports. (Photo by Dylan Taylor-Lehman)

Cherished trucks evoke a past era

For some truck aficionados, nothing beats the sight of a good restoration. For others, it’s a nice winch or the unmistakable roar of an engine they just don’t make like they used to. Whatever the appeal, it could be found at Vintage Truck magazine’s annual vintage truck show, held last Saturday at Young’s Jersey Dairy.

“It used to be all about cars but the truck hobby is gaining momentum,” said Erin McCarty, managing editor of Vintage Truck.

This year is the 14th year the magazine has hosted its annual truck show. Over 150 vintage trucks were present, from hearses to tow trucks to a chain-driven 20 horsepower truck from 1914 with bike tire-like wheels. McCarty said the show was originally put on as a fun way for the magazine to show appreciation to its readers. The show is a place to hobnob with other enthusiasts, almost like being able to walk around inside an issue of the magazine.

The event, which is free to the public, drew participants from all over Ohio and as far away as Florida and Saskatchewan. Attendees could browse models and merchandise and were serenaded by the music of Sawgrass, a bluegrass band from Dayton.

Jim Zehring came from Farmersville, Ohio, after hearing about the truck show at another truck show the night before. He and his wife sat in lawn chairs under an awning behind his 1962 Dodge D-100 truck, but he was happy to jump up and answer anyone’s questions. His truck had an immaculate cherry-red paint job and he said he worked on it for three years, “piddling around in [his] garage.” He has a few other vehicles but said that working on them is only half of the appeal.

“I like to get out and drive ‘em! None of this trailer-hauled stuff for me!” he said.

The show was also the perfect place for those who may not know anything about trucks to learn something new. In fact, the show made truck converts out of a couple from Dayton. They said they usually go to car shows but thought they’d give trucks a try. The husband, who said he’s “into mechanical stuff” was impressed by the show.

“It’s not often you get to see trucks like this,” he said. “The old Studebakers, the old military trucks — it’s great!”

The expo is intimately tied to the Yellow Springs community. Young’s Dairy has hosted the event every year it has taken place. The dairy’s owners were fans of trucks and used to have a vintage International delivery truck operating on their property. The show is put on by Vintage Truck magazine, whose publisher Ertel Publishing is headquartered on South High Street. Ertel’s staff and assorted volunteers staffed the truck show, which is a lot of work but a fantastic opportunity to be immersed in a world they enjoy.

That mix of business and pleasure describes owner Patrick Ertel’s luck with Ertel Publishing, which he founded in 1988. He said he never would have imagined that he’d make vintage trucks and antique tractors his livelihood. His odyssey started when, while working as an aerospace engineer at Wright Patterson Air Force Base, he was stopped at a stoplight behind a truck pulling an ancient tractor. He was intrigued and stayed behind the vehicle, following it to an antique tractor show. There he struck up friendships with some of the exhibitors and came to understand the tractor subculture lacked a good way to keep fellow tractorheads informed. So Ertel hatched a plan to put together a magazine dedicated to tractor culture, even though at first he didn’t even know anything about tractors or magazines. He produced the first issues out of his basement. The magazine was well enough received that he was able to pursue it as a full-time venture.

“There weren’t magazines like the ones I produce available to people. I just picked a subject matter that just seemed right for someone to serve it,” he said. Ertel began publishing Vintage Truck (née This Old Truck) a little while later.

Ertel is involved in all aspects of the magazine and the show, from writing articles to organizing the event to helping the trucks park on the field. An interview for this article was postponed because he was busy fabricating trophies in his garage.

“When we started … I’ve always wanted to be a nonconformist. I didn’t want to go down to the trophy store and buy a wooden trophy,” Ertel said, “so I built a little diorama with one of our antique trucks on it. The trophies have gotten more elaborate, and I spend more and more time working on them every year!”

Similarly, Ertel said a lot of the appeal of old trucks has to do with the pleasure of fixing them up and getting his hands dirty. A common sight at the show was an attendee crawling under a truck with a camera to get a close-up shot of a nice chassis.

“I love getting out in the shop and tinkering with a simple machine like a 50-year old, old truck,” Ertel said. “It’s relaxing to me. There’s a sense of accomplishment when you make it work or make it nice.”

Tim and Margaret Brown agree. They came from Pleasant Hill, Ohio in their 1947 Willys Jeep Truck 4WD. Tim Brown said his brother bought it after finding it behind a barn buried in weeds that were taller than the truck. It wouldn’t work because the pistons were stuck, but some “old-timers told him to soak them in oil and be patient.” He did just that — soaked the pistons in oil, tapped them lightly with a hammer, and repeated the process over and over again. One day the pistons began moving freely so he tried the ignition and the engine roared back to life. “It started right up, and the engine doesn’t even smoke! You can’t hurt old trucks like this!” he said.

The mechanical aspect may be intellectually stimulating, but the truck show is especially meaningful to Ertel and attendees because the trucks hearken back to a different time. The tractor that inspired Ertel to start the magazine had the effect it did because he recognized it as similar to one he had driven as a kid.

“We think about our lives 50 years ago and see all the good parts. A lot of people had antique trucks — or what were then new trucks — that they remember as the good parts of their lives, and they like to relive the era when these machines were new,” Ertel said.

The staff presented the homemade trophies to the exhibitors at the end of the day. People laughed at the ugliest truck award, cheered the person who drove the furthest to the show (962 miles), and whistled in sincere admiration at the vehicle that won the Editor’s Choice designation. Ertel seemed genuinely honored to shake the hand of Duane Helman, whose 1939 Ford 1.5 ton pickup had a restored tractor on its bed.