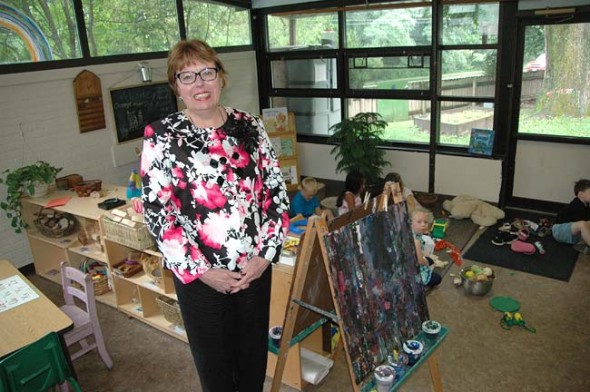 Last month the Community Children’s Center hired Rebecca Lowry of Beavercreek as the new executive director. She has 37 years experience teaching and leading in public schools and will pursue a master’s in business while serving the Yellow Springs community. (Photo by Lauren Heaton)

Last month, nearly a year after the Community Children’s Center lost its director, the local preschool and daycare hired Rebecca Lowry as its new executive director. Lowry began her job on July 22. While her 37 years in public school counseling and administration around the Midwest will inform her approach to the challenges at the local school, Lowry said she is looking forward to leading a smaller institution closer to her long-time home in Beavercreek.

“I was looking for something not too high pressure,” she said in an interview last week.

The Children’s Center isn’t as large as the Dayton Public School District and Westmoreland County Public Schools in Virginia, where Lowry served as superintendent before retiring on Aug. 1. But the center’s leadership and financial issues are complex and have weighed on the school for at least three years. Since the Children’s Center Board of Trustees announced last fall that enrollment hit an all-time low and the school had just enough assets to last until the spring, the center has been held together by the grace of community donations and a constantly shifting team of board and administrative leaders. Board President Amber Botkin is helping to apprise Lowry of the situation and is confident that the school, which lost its Step Up to Quality one-star rating this year, can regain its standing with Ohio’s voluntary early childhood school rating program.

“We understand that the Step Up to Quality rating is a reflection of our programming, and the board has made it a priority,” Botkin said last week. “We’re confident that with the [Step Up to Quality] application in the fall we will see an improvement.”

The board chose Lowry out of an initial pool of 57 applicants from a national search. A committee chaired by board members Lisa Abel and Maureen Lynch conducted several rounds of interviews, and according to Botkin, Lowry “stood out immediately” due to her high level of early childhood education degrees and community outreach and fundraising skills.

As a native Virginian, Lowry began her career as a school psychologist and a special education teacher and served in Botetourt and Bedford counties in Virginia for 19 years before taking on administrative positions with Dayton Public and Cleveland Municipal schools in Ohio and Chichester School District in Boothwyn, Penn. She holds an MS and Ed.S. from Radford University, and a Ph.D. from Virginia Tech.

Lowry had served as the Westmoreland superintendent since 2011, before she resigned in January 2015. According to the Journal Press of northern Virginia, the Westmoreland district had been under investigation at the time by the Internal Revenue Service and the State of Virginia for being in arrears with both federal tax and state teachers retirement system payments. According to Lowry this week, Westmoreland was understaffed in payroll and attempting to address the problem under strict budget constraints, ended up with late payments to the IRS and STRS in October 2014 that were caught up by January 2015. Lowry resigned because she had intended to take a job with a school system closer to home — a situation which for independent reasons did not work out, she said.

According to Botkin, the Children’s Center board addressed the issue with Lowry and believe that the Journal Press was “unfair” in its reporting and that Lowry responded quickly and appropriately to the district’s financial matters when she became aware of them.

“We are absolutely aware of it and we have absolutely no concern about Rebecca’s skills,” Botkin said. “Rebecca is fantastic, and we are confident in her ability to bring the center forward and make it an educational center of excellence.”

Lowry has not been shy about making the changes she sees necessary at the Children’s Center. In her first two weeks on the job, she terminated the contracts of three of the center’s 17 employees, and plans to increase the janitorial position from part to full time. According to Lowry, after speaking with Interim Directors Toni Dosik and Karen Wolford, who helped guide the school for the past five months and have now stepped back as consultants, it was clear that the ratio of students  to teachers was unaffordable. Daily enrollment has continued to hover between 21 and 35 students, similar to last fall when the board said enrollment was unsustainable. So she discontinued the positions of one full-time floating teacher, Director of Operations Carmen Brown and After School Care Program Director Levi Cowperthwaite, though at least one of those positions will likely be refilled at some point, she said.

Also in her initial steps as director, Lowry introduced salaried pay for the three lead teachers, Marcia Greer for the toddler group, Mary Stukenberg for the pre-kindergarten group and Becca Mastola for the school-age group (in addition to the three salaried administrators, Lowry, Business Manager Danielle Fodal McCray and Kitchen Manager Ila Peck, who prepares two hot meals, breakfast and lunch, plus afternoon snacks each day.) Teacher compensation in the past had been hourly, but she hopes that salaries will help to lift morale and contribute to stability, Lowry said.

But the center still has much work to do, she said. For at least the past five years the Children’s Center has held one of the five stars that can be awarded to preschools in Ohio’s Step Up to Quality system. According to former operations head Brown, the Children’s Center leaders agreed not to apply with Step Up to Quality this spring because so many of its employee, student and accounting records had either been trashed or misplaced during the leadership transition. According to Brown, it’s not so much the programs that have suffered but the record keeping, which she, Dosik and Wolford worked hard to reorganize this past spring. They managed to pull together about 80 percent of the information needed to apply again this fall, Brown estimated. Lowry indicated last week that by focusing on some basic safety training for staff, specific facility improvements, and better record keeping, the Children’s Center should be back in compliance with state standards. And Botkin believes the Center could qualify for not just one but three stars by the fall, she said.

As if that isn’t enough, while Lowry is getting the center in shape, she also plans to start a master’s in business administration degree at Wright State University. According to Lowry, the board agreed to cover half of the program’s tuition as a benefit in her contract. As the head of fundraising for the Children’s Center, which is largely what’s now keeping the center operational, Lowry hopes to gain knowledge in that field through the weekend program at WSU. She anticipates that the degree will take longer than the typical two-year full-time commitment.

Ultimately, according to Botkin, to become fiscally self-sustaining, the Children’s Center needs to increase enrollment. In 2011 the school averaged 80 students throughout the year, with occasional bumps of over 100 children. Raising the profile of the center to appeal to more families is another goal that Lowry will be focused on as she takes the reins, according to the board.

Lowry also plans to spend time listening to parents and staff and building trust as the liaison between the two groups. Because the Center has experienced significant turnover, Lowry looks forward to establishing consistency for families and rebuilding the community’s confidence in the Children’s Center as the foundation for early childhood education and care in the village.

“There is a strong desire from the community for this center to work — it’s an icon,” she said.