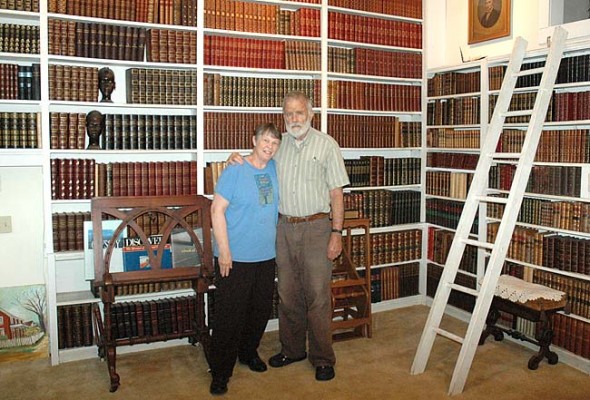 Jeanne and Hardy Ballantine stand in front of the extensive library of their North Walnut Street home. The couple have lived in Yellow Springs since 1973 and are relocating to Amherst, Mass., to be closer to their three children. Despite the excitement of a new place, bidding goodbye to Yellow Springs isn’t easy. “We’ve spent most of our lives here,” Hardy said simply. (Photo by Dylan Taylor-Lehman)

A home that’s hard to leave

How does one sum up what constitutes home? A place? A dictionary definition? A combination of family and comfort and growth? The term is as complex as the sensation it attempts to define.

“Perhaps home is not a place but an irrevocable condition,” writes James Baldwin in “Giovanni’s Room.” A precise definition may be evasive, but that doesn’t lessen the difficulty of leaving when it comes time to pull away. A local couple has been navigating this whirlwind of emotion as they plan their transition out of Yellow Springs, their home of 42 years.

Hardy and Jeanne Ballantine moved to Yellow Springs in the summer of 1973 but now, after years of deliberation, the couple is moving to Amherst, Mass., to be closer to their children. The move is a sort of coda to the Ballantines’ encouragement that their kids lead adventurous lives, like they tried to. The younger Ballantines are in the middle of their own careers and the process of settling down, a transition reflective of the circumstances that brought the Ballantines to Yellow Springs.

The couple settled in Yellow Springs without any conception of how they might take to the town. But Yellow Springs quickly became home, and the evolution of their lives was reflected in the changes to their North Walnut Street home over the years. The house expanded in a few directions to accommodate the needs of their growing family, and their bookshelves held the accumulated treasures of their evolving careers. Their fenced-in yard was the territory of five generations of Scottish terriers.

They agree that Yellow Springs can’t be duplicated. The village has been an extraordinarily safe and great place to raise kids, they said. Their kids were able to zoom all over town on their bikes and play in any number of yards. The size and classic layout of the town — a grocery store, pharmacy, hardware store and bank all on a main street — helps foster an attitude of closeness among its residents. Hardy said.

“Growing up with that kind of security and well-being is what makes this town special,” Jeanne said.

The comforts of Yellow Springs may have helped convince them to stay, but the Ballantines also made a point to get outside of town. The ennui of stasis was tempered by extensive travel. The Ballantines spent semesters in Italy, Japan, and Spain and longer tenures in Rwanda, Prague, and Calcutta, among many other places. In a lot of ways it was the best of both worlds, Jeanne explained. They were able to experience so many parts of the globe but knew that they had the perfect place waiting for them when they wanted to come home.

Part of the comfort of home was the enterprise of their engaging careers. In fact, after retiring from academia, Hardy’s commute to his new profession was all of 20 feet.

In addition to being a “professional volunteer” in Yellow Springs, Hardy opened Ballantine’s BookCrafts in a small building next to the family home. The building is full of old machines and tools, and Hardy wears the apron of a classic tinkerer. He honed his craft by taking weekly classes with a bookbinder in England, where the couple lived in 1980. He has repaired a number of Talmuds and Bibles, including some ancient books with family histories written inside. Antioch has some of his works, and he has been commissioned to make books for CEOs. Bibliophily is an evident characteristic of their house. Hardy grew up in a house filled with books, and the same books line their shelves today, as he inherited the collections of his grandparents and great-grandparents. He has repaired some of these volumes himself, and the collection will in turn be passed on to their children.

Jeanne’s career also involved significant contributions to the world of learning. She taught for 38 years in the department of sociology and anthropology at Wright State University, and a number of the sociology textbooks she has co-authored are highly regarded, including “Our Social World,” which is consistently one of the top-10 sociology texts nationwide. Jeanne served as chair of the sociology department and president of the Wright State faculty. She started the Center for Teaching and Learning there, a sort of school for professors, which helps them learn how to better engage with students and plan courses. She said she liked working in this capacity because it gave professors the chance to work together to improve instead of being dispassionately evaluated.

Despite personal and professional legacies tied to Yellow Springs, the couple will be able to move their work with them. Hardy is taking some of his bookbinding supplies and Jeanne can continue to write and revise her considerable body of work.

On the one hand, Hardy is eager to get going. He said he wants to leave before November so he doesn’t have to rake the leaves in his yard, but he is also semi-seriously looking forward to getting a snow blower to do battle with New England winters.

The Ballantines have been to New England a number of times to visit their children and have been able to get a feel for the timbre of their new home. Despite the snow-blower-requiring winter, the fact that Amherst is a university town appeals to them. The things they love about Yellow Springs — the small theaters and the intellectual environment, for example — exist in Amherst on a proportionally larger scale. And the imminent proximity of the Ballantines to their four grandchildren makes them a little less wistful about moving, Jeanne said.

Nevertheless, the interview for this article was punctuated with moments of reflective silence. A lot can happen in four decades. “We’ve spent most of our lives here,” Hardy said simply.

The Ballantines discussed the cyclical nature of life and how that has influenced how they are looking at moving. It’s sad that long-time people are leaving, Hardy said, but their exodus can be good for the community.

“We don’t need a huge house at this point in our lives — it’s better that it serves a family with children,” he said.

But they are certainly going to be back, Jeanne said. They still have numerous friends in Yellow Springs and Hardy said he’s looking forward to sitting on the porch of the Mills Park Hotel when it’s finished, drinking mint juleps and watching trucks go by.

3 Responses to “A home that’s hard to leave”