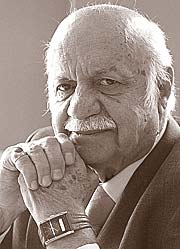 Dr. Suheil Badi’ Bushrui, local resident, distinguished scholar and tireless champion of the cause of peace, passed away on Sept. 2 at the age of 85.

Born in 1929 in Nazareth, Palestine, Professor Bushrui was privileged to attend the elite St. George’s School in Jerusalem where he learned the art of being an “English gentleman.” He went on to complete his Bachelor of Arts in literature at Cairo University and his doctorate at The University of Southhampton where he researched the dramatic works of W.B. Yeats. He would become known for his outstanding contributions to Irish and Arabic literature, and his efforts to enrich as well as improve interreligious and intercultural understanding.

Professor Bushrui’s contributions to the fields of literature and education in the Arabic and English-speaking worlds were distinctive. He penned a vast number of books and scholarly articles on themes that ranged from literature to religion to world order. He was one of the world’s foremost scholars of Arabic and English literature and the first non-Westerner to be appointed as chair of the International Association of the Study of Irish Literature.

In his life as an educator, Professor Bushrui taught at universities in Sudan, Nigeria, the U.K., Canada, Lebanon and the U.S. and was the first Arab national to be appointed to the Chair of English at the American University of Beirut, where he was a member of the faculty from 1968 to 1983.

He was then offered a position at the Center for International Development and Conflict Management at the University of Maryland in College Park where he remained in a variety of distinguished capacities until this year.

At the university, Bushrui promoted the writings of Lebanese-American author and artist Kahlil Gibran and other contemporary Arab writers in America, and contributed to numerous conferences on global issues, intercultural relations and world governance.

Professor Bushrui became the first incumbent of the Bahá’í Chair for World Peace at the University of Maryland in 1992, a position he held until his retirement from the post in 2005 and from which he sponsored events and publications that advocated alternatives to the violent resolution of conflict, global education and spiritual solutions for otherwise intractable social ills.

In 2009 a generous grant from George and Lisa Zachem supported creation of an official Gibran Chair for Values and Peace for which Professor Bushrui served as the inaugural chair. In this capacity he continued to vigorously promote scholarship, conferences and publications in this field until his time of passing. His latest book was “Desert Songs of the Night: 1500 Years of Arab Literature” (Saqi Books, 2015), edited with James Malarkey. His other major works include: “Kahlil Gibran: Man and Poet” (with Joe Jenkins); “The Spiritual Heritage of the Human Race: An Introduction to the World’s Religions” (with Mehrdad Massoudi et. al.); “Speeches and Articles 1968-2012: His Royal Highness The Prince of Wales” (ed. with David Cadman) and “Sahib al-Samou al-Malaki: Al-Amir Charles Yattahadath”, Bushrui’s translations into Arabic of a selection of speeches of the Prince of Wales.

Among his numerous activities, Professor Bushrui was a founding member of the International Dialogue on Transition to a Global Society. He also served on the Board of Governors of The Temple of Understanding, a world-wide interfaith organization which is an affiliate of the United Nations, and was an International Fellow of the Temenos Academy in London. He was also was appointed Creative Member of The Club of Budapest. From 1982 to 1988, Professor Bushrui was cultural advisor and official interpreter to the President of the Republic of Lebanon.

Prof. Bushrui received numerous accolades and honors, including the Lebanese National Order of Merit, London University’s Una Ellis-Fermor Literary Prize, the Silver Medal of Merit of the Vatican-sponsored Military and Religious Order of Constantine and St. George, the University of Maryland’s Outstanding Faculty Award, and the Temple of Understanding’s Juliet Hollister Award for exceptional service to interfaith understanding. Previous recipients of the Hollister award include: Her Majesty Queen Noor of Jordan; Mary Robinson, former UN High Commissioner for Human Rights; His Holiness the XIV Dalai Lama; and President Nelson Mandela.

Yet his life’s work extended beyond the confines of his scholarly endeavors or formal contributions on the national and international stages. Prof. Bushrui worked with generations of young people to promote a culture of peace and was recognized in the many countries in which he taught for the transformation he brought to the lives of his students. Young and old, virtually all who met him were affected by his unique ability to connect on a profoundly personal level. Many students attest to his enduring inspiration throughout their lives and work.

Professor Bushrui is survived by his beloved spouse of 61 years, Mary, his daughter Nadia and son-in-law James Malarkey (all residing in Yellow Springs); his dear grandsons Michael (spouse Nadine), Daniel and Kevin; and great-grandson Marlon.

One Response to “Suheil Badi’ Bushrui”