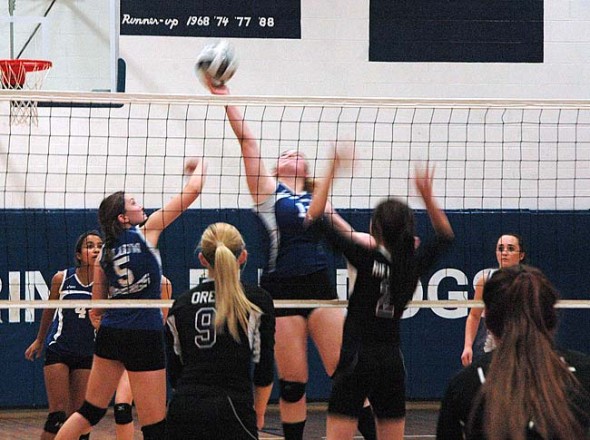 Madeline Neilsen prepares to annihilate the ball and her opponents during YSHS’s game against Middletown Christian on Oct. 8. The Bulldogs not only won the game but earned the Metro Buckeye Conference Championship in the process, a first for the team and the school. The team has such good chemistry and works so well together, said Coach Christine Linkhart. “This team is a coach’s dream!” (photo by Dylan Taylor-Lehman)

Volleyball
Volleyball team takes MBC
“The Bulldog volleyball team likes to give their fans their money’s worth!” YSHS volleyball coach Christine Linkhart said last week. When YSHS traveled to Emmanuel Christian Oct. 6 to play for first place in the Metro Buckeye Conference, they made it quite an event. With both teams tied at 7–1 in the conference, the Bulldogs were fired up. The Bulldogs took the first two games in a hard fought battle, and Emmanuel Christian battled back just as ferociously to take the next two. In the fifth and final set, the Lions took an early 1–8 lead but great serving by YSHS sophomore Payden Kegley brought the Bulldogs back to an even score of 8–8. The Lions earned two more points before hitting the ball into the net to give the Bulldogs their chance to take control. Julian Roberts went back to serve, earning four points to give YS a 13–11 lead. After an amazing dig by Elizabeth Smith, Meredith Rowe went back to serve game point. The Lions once again hit the ball into the net to give YSHS the win 26–24, 25–21, 21–25, 19–25, 15–12.

“Once again, this was a team effort,” said Linkhart. “This team needed each and every player to do their jobs to win this game. They work like a well-oiled machine.”

Every 40 years, Venus completes the star pattern it makes across the sky and returns to its original location. The same can be said for the YSHS volleyball team: on Oct. 8, YSHS came out on top of their final conference match of the season and finished etching their own star into the Miami Valley sky, ascending to the top after nearly 40 years.

With Middletown Christian sitting in last place in the league, the Bulldogs should have had an easy match ahead of them, Linkhart said. The match was one of profound significance, awarding the winner the title of Champions of the Metro Buckeye Conference. A win against Middletown would give the YSHS not only their first championship in volleyball since joining the Metro Buckeye Conference in 2000 but their first championship since a 1977 victory in their previous conference. Linkhart said that with a phenomenal season and a real chance at taking the title, the players were obviously feeling a bit of pressure. The same could be said of Middletown, who knew the stakes coming in and put up a correspondingly intense fight. “I told them to stay focused and play their game,” Linkhart said. After the wake-up call in the second game (in which the Bulldogs lost by three points) they did just that. These players refocused in the third match and didn’t look back, she said. Middletown Christian succumbed to the Bulldogs’ tenacity 25–11, 22–25, 25–10, 25–14.

“We are so proud of the varsity volleyball team for this accomplishment” said Yellow Springs school district’s Athletic Director Nate Baker. “This group of girls showed resilience and determination throughout the season, and it was a whole lot of fun to watch them win the championship. We wish them continued luck in the upcoming sectional tournament.”

On Saturday, Oct. 10, the Bulldogs traveled to Northwestern High School to play against Mechanicsburg and Tri-Village high schools. In the first game against Mechanics­burg, the Bulldogs came out looking a little worn out from the previous week’s exciting conference games. Linkhart said that even though the Bulldogs lost the match 25–21, 23–25, 20–25 and played a little sluggishly, they almost pulled out the match. “I’m sure had we played another day, we would have played with more intensity,” she said. “I think they were just trying to regroup after the big week we just had!”

The second match of the day, the Bulldogs played more energetically, and the team won the match in two games 25–14, 25–22. Freshman, Alex Ronnebaum, had eight kills followed by Meredith Rowe with six. Kasey Linkhart put up 11 assists and Julian Roberts had 5 assists.

Linkhart had this to say about the season: “This team is a coach’s dream! I can’t begin to tell you how proud I am of this team. We had a rough start — we couldn’t practice in our own gym for two weeks of preseason and then had some injuries. But they have really good chemistry and work so well together. And they never give up! In at least five matches they were down and came back to win. In several of those matches the other teams had game point. Congratulations Bulldogs!”

The varsity now has a record of 14–6, with a 9–1 record in the Metro Buckeye Conference.

SOCCER
The YSHS boys soccer match against Fairborn scheduled for Oct. 8 was rescheduled to Oct. 17. The boys beat Kenton Ridge 3–1 at home on Oct. 10 but lost on foreign soil to Xenia Christian 0–3 on Oct. 10.