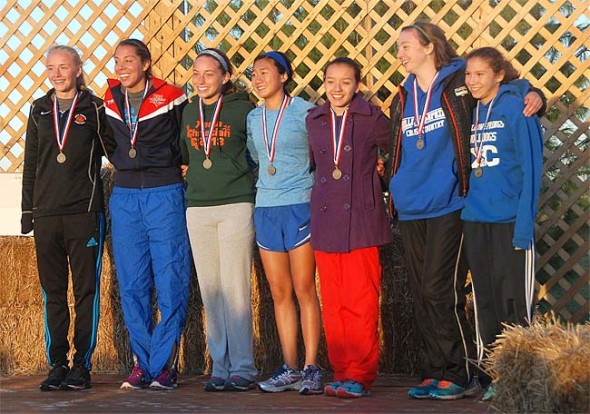 Yellow Springs High School cross-country runners Charlotte Walkey (second from right) and Jude Meekin (far right) earned all-conference first team honors at the Metro Buckeye Championships on Oct. 16. Walkey ran her best 5K time of the season at the championship, as did many of her teammates. The Bulldogs will run in the district meet on Saturday, Oct. 24, at the Miami Valley Career Tech Center. (Submitted photo)

Varsity Volleyball
On Thursday, Oct. 15, the last match of the season, the Yellow Springs varsity volleyball team paid tribute to the senior players on the team. The Bulldogs thanked Meredith Rowe, Madeline Neilsen, Dy’Meisha Banks and Alima Musha for their hard work and dedication to the team this year, and all the years past. The team’s final match was against Middletown Madison, and in Bulldog fashion, they made it an exciting night for Bulldog fans. Winning a close first game by just two points (27–25), the Bulldogs dropped the next two games (24–26, 25–27), again by only two points. But contending with pressure is nothing new to these feisty players, and they picked up their game in the fourth set to win 25–19. With the fifth and final regular season game on the line, the players were determined to make the seniors’ last game a victory. The Bulldogs jacked up the intensity to win 15–12.

Elizabeth Smith was on fire with 21 points, 8 kills, 12 digs and 1 block. Kasey Linkhart put up 4 points, 24 assists, 4 kills and 8 blocks with Julian Roberts helping out with 3 points and 11 assists. Alex Ronnebaum had a game high of 17 blocks, while Elle Peifer added 7 blocks on the night. Payden Kegley denied the Mohawks’ kills with her 19 digs. But the highlight of the night were seniors Neilsen who had 8 points, 4 kills, 4 blocks and Rowe with 7 points, 1 ace, 22 kills, 5 blocks and 11 digs.

“What a way to end our season!” said coach Christine Linkhart. “These girls like to keep you on the edge of your seat before putting the final touches on the game. It’s been a great season — I’m sad that it’s over!”

The Bulldogs traveled to the battlefield that was Troy High School, where they faced Houston High School. Ten teams played that day; half walked away a little taller, half walked away chastened. Coach Linkhart said that YSHS and Houston were very evenly matched teams, with neither team willing to budge. YSHS came out nervous in the first game allowing the Wildcats to take an early three-point lead. The Bulldogs kept the game close but couldn’t quite catch up. The Bulldogs were caught on their heels during the third game and had trouble receiving the Wildcats’ serves. The fourth game turned out to be one hard-fought point after another, with the teams trading points with one another from the outset. Trailing 17–21, Payden Kegley served four points to tie it up. Houston then earned two points on a side out and a kill. Elle Peifer went back to serve to once again to give the Bulldogs a one point lead. A side out and a service ace by the Wildcats then gave them a one-point lead. With game point on the line, a miscommunication by the Bulldogs forced the ball into the net. The Wildcats won the match, 25–27, 26–24, 11–25, 23–25.

Even with some measure of immortality attained with the Conference championship, Linkhart said that Saturday’s outcome was of course tough for the Bulldogs. The privilege she has had working with her team is as rewarding as tournament success, she said. The team’s experience at the tournament is a testament to the mettle of her players.

“They handled the loss with class and were smiling when they came off the court,” she said. “They knew they had left it all out on that court and had no regrets with how they played.”

Linkhart imparted these final words about the Varsity’s season.

“I’ve said it many times but I am so proud of these players. I’m going to miss seeing these ladies every day for practice and games. I’m really going to miss my seniors but I’m looking forward to next season with my six returning players!”

JV Volleyball
The YSHS JV volleyball team made sure they went out with a bang for their last game of the season. It seemed that it would be an easy evening for the Bulldogs, as they maintained control from the beginning of the first game, winning it 25–19. The Mohawks had other plans, though, when they came out in the second game of the match completely fired up. The Bulldogs couldn’t seem to get things going until late in the match when they suddenly decided enough was enough. They came back from a deficit of 5 to win the match 27–25. Senior Dy’Meisha Banks racked up 7 points, 1 ace, 16 digs and 1 assist. Alima Musha, serving for the first time this season, supported the team’s win with 1 ace. Lorien Chavez had 13 digs, followed by Raven James with 8 digs, 3 points, and 1 kill. Amani Wagner helped seal the win with her 12 points, 3 aces, 2 kills, 2 blocks and 6 assists. Coach Linkhart was characteristically proud of the team.

“These players are fighters,” she said. “They are the most determined group of players I have ever coached, and I’ve really enjoyed coaching them this season!”

Cross Country
The YSHS cross-country team also competed in its own Metro Buckeye Conference Championships last Friday. It was a championship filled with personal bests, an impressive way to end the season. The team had a very strong showing in the MBC’s 5K race, coach Jeff Collins said, with Charlotte Walkey (21:21, her best of the season) and Jude Meekin (21:38) earning all-conference first team honors, and Olivia Brittlinger-Conn (22:40) earning a spot on the second team. Maya Creighton crossed the finish line in 24:21.

The cross-country team will compete at the district championships Saturday, Oct. 24, at the Miami Valley Career Tech Center.

Soccer
The YSHS boys soccer team sailed away from Fairborn High School on the wings of victory on Oct. 17, beating their opponents 2–0. The game was scoreless going into the second half, but an early goal by Yellow Springs and a Fairborn captain fouling out gave YSHS an edge for the rest of the game. They ended their regular season play 8–5–1.

The YSHS girls soccer team ended the season with a record of 1–15. Their last game was in the Div. III sectional tournament on Oct. 19. The Bulldogs lost to Franklin Monroe High School.