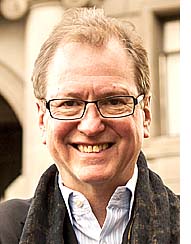 Thomas Manley, current president of the Pacific Northwest College of Art, has been named the new president of Antioch College. (Submitted photo by Matthew Miller)

Thomas Manley, the current president of the Pacific Northwest College of Art in Portland, has been chosen the new president of Antioch College. Dr. Manley will be the second president at the revived Antioch, following Mark Roosevelt, who is leaving the job at the end of his five-year contract on Dec. 31.

Manley will start his new position in March, 2016. Current Antioch College Vice President for Finance and Operations Andi Adkins will serve as interim president between December and March.

“Reading the search description, I was impressed again and again with the boldness of what was being imagined,” Manley stated in a college press statement released Wednesday, Nov. 18. “Here was a vision for transformational education that was value-based and pragmatic, intellectually demanding and experientially grounded. How could I not raise my hand to join in its success?”

Manley brings to the job more than 35 years of experience in education. At Pacific Northwest College of Art in Portland, where he’s been president since 2003, he is credited with leading a turnaround for that college into “Portland’s most well-rounded, diverse and most established arts institution,” according to the press release. The turnaround also included a campus expansion and the cultivation of the largest gift to an arts organization in Oregon’s history.

Before coming to PNCA, Manley spent 22 years at the Claremont Colleges in southern California, mainly at Pitzer, a small liberal arts college with an emphasis on social justice and social responsibility. There, he was a member of the faculty and also held several administrative positions.

A specialist in Japan, he has a bachelors degree in East Asian history and education from Towson University, a masters in Asian studies and a doctorate in education from the Claremont Graduate University in Claremont, Calif.

More than 200 applicants applied for the job, according to the press release, and Manley was selected by a 21-member search committee composed of college trustees, staff, students and alumni. The committee was headed by Malte von Matthiessen of Yellow Springs.

“I am thrilled — but not surprised — that we were able to attract Dr. Tom Manley as our next president,” Von Matthiessen said in the press release. “He is compatible with Antioch College values and traditions and I am convinced he is the right person to lead Antioch into a new era.”

Manley was impressed with not only the college’s historic traditions and values, but its path since reopening in 2009. He described that path as “distinctive and brave.”

“American higher education — which has long been a beacon in the world — must seek its reinvention and I am among those who believe Antioch is doing just that. By embracing entrepreneurial opportunities and innovative strategies in its own redesign, the college is stepping forward to lead once again,” he said in the press release.

Manley is married to Susanne Hashim and they have a young daughter, Chedin. He also has a son, Dashiell; a stepdaughter, Karina; and a stepson, Johan.

A longer story on Manley will be in next week’s paper, along with an interview with Mark Roosevelt, the outgoing president of the college.