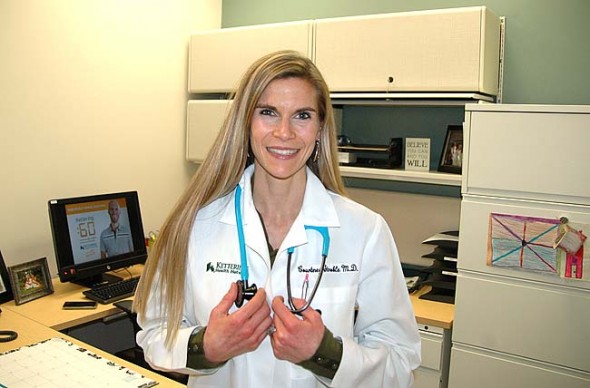 Courtney Stroble, M.D., always knew she wanted to be a doctor. But it took a few years of practicing acute care to discover that her deeper calling was family medicine.

“I realized I wanted to see my own patients, I wanted to develop relationships with them,” she said in an interview last week — her first week working at Community Physicians of Yellow Springs.

Stroble is the newest member of Community Physicians, a medical practice with deep roots in the village. Started by physicians Harry Berley and Carl Hyde in the 1950s, the practice is now under the Kettering Health Network umbrella. Stroble replaces outgoing doctor Neha Patel, D.O., and joins Bobbi Barth, D.O., new to the practice this fall, and David Hyde, M.D., son of founder Carl. Two nurse practitioners, Clifford Fawcett and Rose Marie Marasco, round out the clinical staff.

Stroble graduated from Wright State University’s Boonshoft School of Medicine in 2009, and completed her residency, also at WSU, in 2012. Though her residency was in family medicine, she believed that acute care offered a better way to balance her desire to grow a family and work as a doctor, so she chose to enter that field.

For the past three years, she’s served in emergency and urgent care settings in Beavercreek, Huber Heights, Xenia and other locations through the Kettering Health Network, and she said she’s enjoyed the work. But she found the schedule less compatible with raising her two daughters — Kennedy and Britton, now 7 and 4, respectively — than she expected. And she wanted a longer-term relationship with patients. Both factors prompted her recent shift — or in a sense, shift back — to family medicine.

“I had a mentor [Teresa Zryd at WSU] who said, ‘You’ll know what you want,’” Stroble recalled. When Stroble told Zryd she wanted to come back to family medicine, “she wasn’t surprised.”
Just a week into her new job, Stroble said she loves interacting with patients. “The first thing I learned coming out of medical school was that people are not textbooks,” she said. “You have to listen to them to understand what might be going on.”

She’s already surprised and impressed by the number of healthy older people she’s encountered, a contrast to her experience in other communities in the region.

“I think the atmosphere of health that [Yellow Springs] advocates makes for healthier people of all ages,” she said, adding that obesity also seems to be lower in the community.

But she recognizes she still has much to learn about the range of health issues and needs in and around Yellow Springs.

“I try to be open and not prejudge,” she said of her approach to patients. “Having prejudgments greatly impairs your ability to assess and treat people for who they are. You can miss important aspects of a diagnosis.”

She characterized herself as “pretty upbeat” yet also “blunt and honest.” Her personality leads her to be “tactfully honest — but honest,” she said. “I believe in empowering patients and getting them involved in their care.” That means being open with them about what’s wrong and about what steps they can take to charge their health, she explained.

“I treat my patients like I would treat family members,” she said.

Though Stroble is new to Community Physicians, she already has two years of history in Yellow Springs. She and her husband, Shawn, a partner in a family business in Springfield specializing in safety refinishing, have lived just south of the village since June of 2013. Stroble grew up in Tipp City, and was familiar with Yellow Springs from childhood trips to Xenia.

“I always thought Yellow Springs would be a neat place to live,” she said.

Stroble and her husband chose the village as their home because it was ideally located between their two jobs and seemed like a “calm, quiet” place to raise their daughters. And they were drawn by the “excellent schools,” she said, adding that it was only when they moved in that they realized they lived one street south of the Yellow Springs district line. Their older daughter now attends Mills Lawn through open enrollment. The couple also just adopted a third child, Paxton, born last week, through the local agency Adoption Link.

The family’s favorite places in and near the village include Peach’s, Dino’s, Mr. Fub’s, Young’s Dairy, Tom’s Market and the playground at Mills Lawn. Stroble is a serious runner, having placed first or second in several local races over the past few years. She runs every morning to relieve stress and keep her sanity, she said.

“As a mom who dealt with a lot of ‘mom guilt,’ that’s important to me,” she said. “Acute care was a step along the road. Practice-wise and lifestyle-wise, this feels right.”