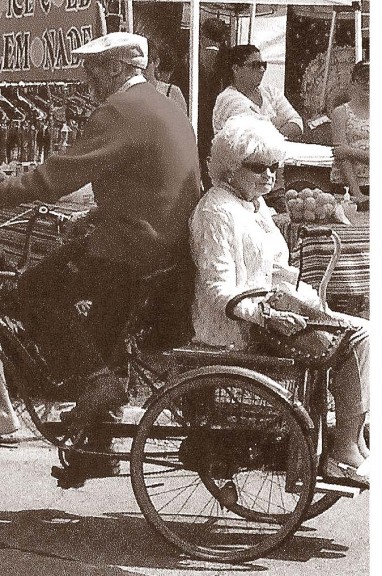 Ruth rides through Yellow Springs in 2013, on a tricycle modified and pedaled by her husband, Tom.

It’s never too late to have the family life you always dreamed of. This was true for Ruth F. Holyoke, who died Dec. 8 at the age of 94 in Yellow Springs due to complications from a fall.

Six years earlier, at age 88, her life turned from a black and white movie to Technicolor when she married Tom Holyoke of Yellow Springs, a friend she knew from high school seven decades before.  Each had married someone else and gone on to raise families. But in 2008, they learned that each was alone. They visited, then married the next year, with Ruth moving to Yellow Springs after 47 years of living in New Jersey. They spent the last six years of Ruth’s life enjoying books together in side-by-side reading chairs while Ruth explored new recipes and served them to Tom’s children and grandchildren in weekly family potlucks. Ruth had found a wonderful new extended family, and when her children and grandchildren from her first marriage visited, they loved seeing her so happy.

Born in 1921 to Walter and Anna Mae Fanning of Middletown, Ohio, Ruth moved with her parents to Milwaukee, where she attended public schools and got her Bachelor of Arts from Milwaukee-Downer College. She worked two years for Studebaker Corporation in South Bend, Ind., then married Paul Drummer, moved to New Jersey, and raised three children. In 1969, after a divorce, she worked in the travel agency business until her retirement in 1992.

Ruth is survived by her husband, Tom; her daughter Dorothy Drummer and son-in-law Greg Eden of Austin, Texas; daughter Kathryn Drummer of Brooklyn, N.Y.; and her son Alan Drummer and his wife Charlene, of Burlingame, Calif.

She is also survived by three grandchildren, Anna Sarfaty with her husband Jory Harris of New York and Dylan Drummer and Dasha Drummer of Burlingame; stepdaughters Linda Odell of Morrow, Ohio, and Kitty Jensen of Yellow Springs with her partner Patty Gehring; a stepson Andy Holyoke and his wife Beth of Yellow Springs; and six step-grandchildren, David Odell with his wife Leah, Katherine Odell, Lila Rose Jensen with her husband Cassidy Clark, Kumar Jensen, Tristan Holyoke and Alban Holyoke.