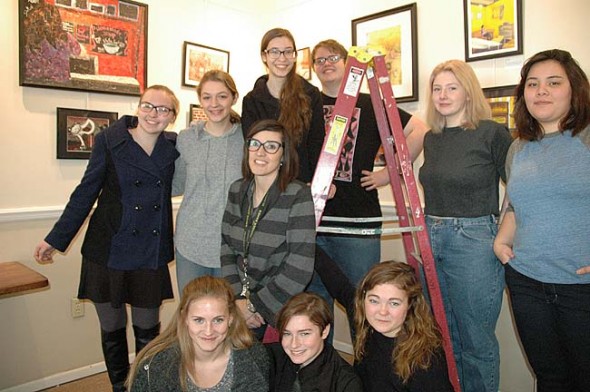 The art of growing up in village

While many older teens feel compelled mainly by the prospect of leaving town, a group of Yellow Springs High School artists are working together to express what matters most to them about having grown up in Yellow Springs.

“So many teens want to only look outward, but this group is reflecting on their experience here,” said YSHS Art Teacher Elizabeth Simon.

Because these young people are artists, their reflections have taken the form of paintings, drawings, prints and photos, among other media. And these pieces make up the upcoming exhibit “YS In Color,” which opens with a reception this Friday, Jan. 22, at 6 p.m. at Village Artisans.

The opening will include “food and fun,” according to organizers, along with prints, cards, pins and originals of artwork for sale. Everyone is invited.

“We hope people come out,” Simon said. “They’ve worked super hard and it means a lot to them.”
In an interview last week, participating artists, who are all members of the school’s advanced art and AP art classes, agreed that while the specifics of their growing up differ, their art reflects a common theme.

“Yellow Springs is a good place to grow up,” Olivia Chick said, as others nodded in agreement.
To Grace Wilke, reflecting on Yellow Springs scenes, “The little things all come together in a puzzle that creates happiness.”

Some of the images of that happiness include scenes of downtown musicians, such as Holly Weir’s print of a boy playing guitar in front of Tom’s Market, and a painting of a saxophone player on Xenia Avenue by Julian Roberts.

“When I think of Yellow Springs, I think of the music downtown,” Roberts said.

Anna Mullin created images of a fisherman at Ellis Pond catching the moon on his line, and the Hyde Road covered bridge being attacked by a monster, because, “I like adding quirky things.”

Grace Wilke’s painting of Ellis Pond reflects her memories of the pond as a special place her father took her when she was a child, and Olivia Chick created a painting of Main Hall on the Antioch College campus. And Madeline Neilson found inspiration at both Current Cuisine and Tom’s Market, where she found “lots of warm yellows” in the produce section.

Other artwork on display include more personal pieces, such as Kyra Siemer’s series of four “spunky, confident and kind” women who were important to her growing up, along with Meredith’s Rowe’s photos of a field of Queen Anne’s lace and eggs in her mom’s kitchen.

The group itself chose to organize and mount an exhibit, according to Simon, and with that choice came additional learning about the work of being an artist.

“Whenever they talk to a professional, it’s good for the students,” Simon said.

Putting together a show also meant creating their pieces as part of a collaborative whole and working together to make the show happen.

“They’re accountable to each other now and it’s a different kind of accountability,” she said.
Asked to described the group of young artists, Simon strove to find enough accolades.

“They’re fantastic,” she said. “They’re extremely creative and hardworking, with a good sense of teamwork. There’s no clash of egos.”

Other artists represented in the show are Callie Smith, Nicklas Wright and Elesha Harney. Some items will be for sale, and the proceeds will benefit the YSHS art program.