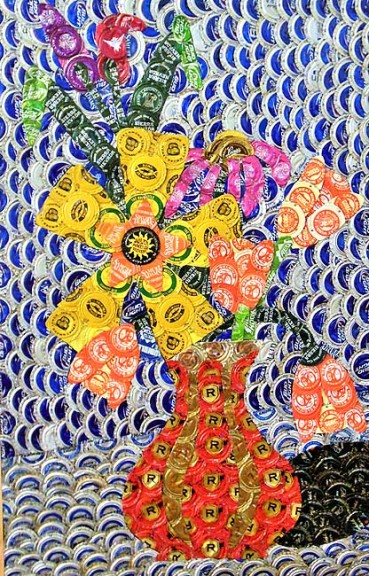 The beer bottle cap art of John Taylor-Lehman is on display at the Yellow Springs Brewery, with an opening reception this Friday, Feb. 12, from 6 to 8 p.m.

The beer bottle cap art of John Taylor-Lehman of Zanesville is on display at the Yellow Springs Brewery through Feb. 28, with an opening reception this Friday, Feb. 12, from 6 yo 8 p.m.

“I like the aspect of focusing on something and spinning it out as far as I can,” Taylor-Lehman said in a recent interview, regarding the beer cap art he’s been making for about five years. He uses thousands of caps to create colorful images, including sea creatures, flowers, snakes and faces, among others.

The brewery exhibit came about when Taylor-Lehman, the father of Yellow Springs News reporter Dylan Taylor-Lehman, was visiting the village and happened on to the brewery, where he spoke about his art to owner Lisa Wolters. From that conversation, he signed on to do a show. He also has shows coming up at the Ohio Statehouse and the Ohio State University faculty club.

See the Feb. 11 News for a more detailed story.

One Response to “Beer bottle cap creations at brewery”