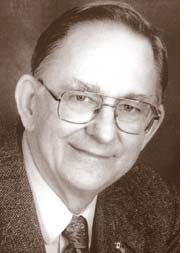 Bill was born on June 12, 1937, in Pittsfield, Mass., to Matthew F. and Martha (Orbanek) Bebko and spent his early years on a small family farm in Richmond, Mass., with his brother and sister. He moved to Yellow Springs to attend Antioch College and study engineering. On April 4, 1959, he married Mary Ann (Tudbury) and they settled in town to raise their four children. Bill worked for 40 years at Vernay Labs. He was a parishioner of St. Paul Catholic Church and an active member on the church’s Cemetery Committee. He served on many Village boards, including eight years on the Planning Commission, treasurer of Village Investment Group and treasurer of the Men’s Group. Bill was kind and generous to everyone he met. He has a host of friends in the states and Canada who remember him with love and appreciation.

When his children moved away, he enjoyed traveling the country to visit and spend time with them. In his later years, when he wasn’t working around the house, he was planning the next project for his beloved family cottage in Canada. He was preceded in death by his parents and his first wife, Mary Ann. Bill leaves his wife, Marsha Ridenour, brother James (Ruth) and sister, June Turnberg (David); his children Anne (Richard — Elise and Christopher), Sara (Patrick — Maria, Angela and Susan), Benjamin (Shonda — Natasha, Benjamin and Natalie) and Mark (Lisa — Mia and Noel), as well as great-granddaughter Gabriella. Bill also leaves step-children Sherrie (John) Saultz, Larry (Jill) Ridenour, Terri (Stephen) Sparling and Barry (MaryAnn) Ridenour, whom he loved and who came to love him.

Upon Bill’s request, in lieu of flowers please consider donating to the charity of your choice.