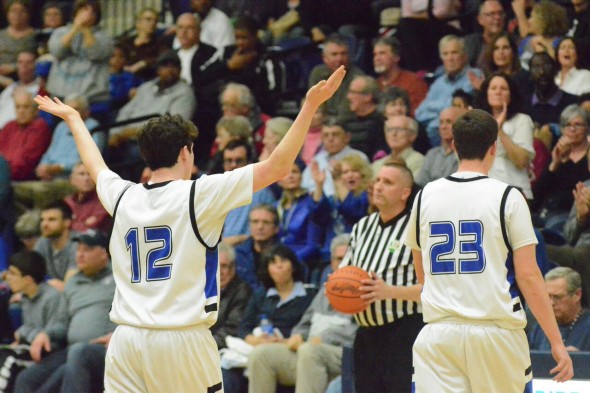 Try as they might, the Bulldog boys lost 46-39 against Jackson Center Friday night. (Photo by Daniel Deaton)

Try as they might, the Yellow Springs Bulldog boys basketball team couldn’t best Jackson Center in Friday’s Division IV regional finals at the Fairmont Trent Arena. The final score was 46-39.

The Bulldogs’ Coach Steve Grasso said after the game that the Bulldogs “ran into a good defensive team and had a hard time scoring. Our boys fought hard and I’m proud of the way they played.” Jackson Center started out strong and at one point was 14 points ahead, but the Bulldogs fought back, narrowing the gap to three points. But ultimately they couldn’t outscore Jackson Center.

According to News photographer Daniel Deaton, the Bulldogs had many chances to hold that three-point difference, but were eventually worn down with fouls, as Jackson Center pulled away with successful free throws.

However, Grasso said he was proud of the way the team played. “To be one of the last eight teams in the state is unbelievable.” He emphasized how much he and the team appreciated the tremendous community support. “We sold over 500 tickets,” he said.

Check back to ysnews.com for more details on the game, and read about it in the March 17 edition of the News.