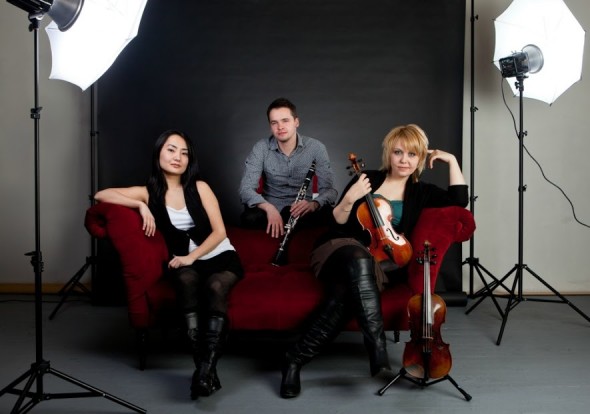 The Zodiac Trio of the Manhattan School of Music will perform in the Chamber Music Yellow Springs series on Sunday, March 20, at 7:30 p.m. at the First Presbyterian Church. Shown above are pianist Riko Higuma, clarinetist Kliment Krylovskiy and violinist Vanessa Mollard. (Submitted Photo)

CMYS to present the Zodiac Trio

The Zodiac Trio will perform a concert of chamber music at 7:30 p.m. on Sunday, March 20, at the First Presbyterian Church. Finalists in the 2009 CMYS Competition for Emerging Professional Ensembles, this group has performed to much acclaim across the world and returns to Yellow Springs with a varied program from Bartók to Ustvolskaya.

Founded in 2006 at Manhattan School of Music, the Zodiac Trio features Vanessa Mollard on violin, Kliment Krylovskiy on clarinet and Riko Higuma on piano. This non-traditional combination was selected as part of the CMYS 2015–16 “Season of Variety.” The ensemble has been critically praised for its “impeccable technique” (Fanfare Magazine), “remarkable musicality of rare intensity” (La Tribune, France), “seemingly effortless ease” (San Angelo Standard Times) and “truly exceptional and sublime talent” (Nice-Matin, France). The French newspaper La Marseillaise declared it to be “one of the best chamber ensembles of its generation.”

Dedicated to education as well as performance, the Zodiac excels at community engagement programs. On Monday morning after their concert, they will visit Mills Lawn School to share their music with the children.

The Zodiac Trio strives to “expand the repertoire” for chamber music by bringing older pieces to the listener and by commissioning new works. For example, chamber music lovers may not know the music of Galina Ustvolskaya, a Soviet composer born in revolutionary Petrograd who studied composing with Dmitry Shostakovich. (Shostakovich is reported to have written to her: “It is I who have learned from you.”) The extraordinary Trio for Violin, Clarinet and Piano (1949) is a good example of Ustvolskaya’s modernist style, which has been described as being based on tension and density.

The program on March 20 will also feature American composer Andrew List’s four-part “Visions from the Aboriginal Dreamtime,” which was written for the Zodiac Trio; Paul Schoenfield’s “Fraylach” and Astor Piazzolla’s “Milonga del Angel and Muerte del Angel,” arranged by the Zodiac’s Riko Higuma. The evening will end with a performance of Béla Bartók’s Contrasts Sz. 111, BB 116.

Concert-goers are encouraged to arrive early. Doors open at 6:30 p.m. for the 6:45 p.m. pre-concert lecture, and the concert begins at 7:30 p.m. Tickets are $25 for adults, $7 for students. For more information, visit http://www.cmys.org or call 374-8800 and leave a message. Those who wish to attend a gourmet dinner with the ensemble after the concert in the home of a local host should call at least four days in advance (donation required).