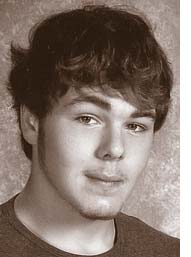 Keida David Johnson, 23, passed away on Thursday, March 17, in Scotts Valley, Calif. His accidental death cut short his plans to move back to the Yellow Springs area. He was so very much looking forward to revisiting the Glen Helen Preserve and rekindling friendships. For the past three years, Keida had been suffering with increasingly debilitating schizophrenia.

Keida was born on Oct. 20, 1992, in Redwood City, Calif., to Donna Lynn Browne and Brian Johnson. Keida attended Yellow Springs schools and graduated from Yellow Springs High School in 2011. He loved football, baseball, fishing and being with his friends.

To know Keida was to love him; his kind and gentle nature was apparent to everyone he came in contact with. We will all miss him dearly.

Private memorial services are planned for March 24 in Redwood City, Calif., and March 27 in Yellow Springs. In lieu of flowers, his family asks that donations be made to The National Alliance on Mental Illness (NAMI) of Santa Cruz County at http://www.namiscc.org or NAMI of Clark, Greene and Madison Counties at http://www.namicg.org. Keida’s family also hopes readers will consider supporting mental health legislation.