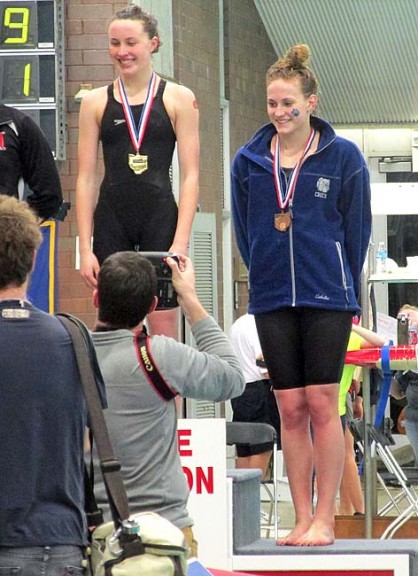 Bulldog swimmer Olivia Chick beamed proudly after receiving a bronze medal for her impressive finish in the 100 freestyle in the State Swimming Championship, held in Canton on Feb. 25 and 26. Chick and fellow Bulldog Aman Ngqakayi represented the school (and village) in the tournament, setting both school and personal records in the process. (Submitted Photo)

It has been a thrilling and overall incredible season for YSHS athletes, as not one but two teams have advanced well beyond conference champions to compete in the upper echelons of high school athletics.

Profligate maxim-spouter Franz Kafka once said that “Work is a release from the longings of our dreams, which often blind us and flatter us to death.” In the case of the YSHS Bulldog basketball team, however, they were not blinded by their dreams but driven by them, and the work they’ve put in over the 2015–2016 season released them from the confines of longing by steadily making dreams come true.

The team pulled off an incredible upset against state champions Tri-Village on Friday, Feb. 26, in the Division IV sectional finals. The battle was hosted at Troy High School and resulted in a 51–50 victory over the Patriots, clinched thanks to senior Bulldog’s Ethan DeWine’s two free throws as the game drew to a close.

The victory marks the third-straight win for the Bulldogs since tournament play began on Feb. 20.

The District IV finals will be held on Thursday, Mar. 3, at 6 p.m. at the University of Dayton Arena. YSHS will play Middletown Christian. A fan bus will be leaving the high school at 4:45 p.m.

“I believe that our 2016 Bulldog swim team will be a historic team, as two of our swimmers completed in this year’s state tournament,” said Coach David Hardwick in a recent statement.

Hundreds of Ohio’s top swimmers, representing over 90 top teams, gathered for a best-of-the-best state championship, held in Canton, Ohio, on Thursday and Friday, Feb. 25 and 26. Representing Yellow Springs this year were Bulldog Team Captains Aman Ngqakayi, a senior, and Olivia Chick, a junior.

As soon as the meet kicked off at 5 p.m. on Feb. 25, Chick plowed through the prelims with two outstanding efforts in the 200 and 100 freestyle events. The 200 freestyle was one of her most exceptional events, as she set (yet another) Yellow Springs school record and a personal record with the blazing time of 1:50.26. She also offered a supreme effort in the 100 freestyle event, with a time of 51:63. Both of these event finishes took her into the finals, held the next day.

Ngqakayi also had a good run in the extremely competitive state tournament. His first race in the preliminaries was the 100 freestyle, which he finished with a time of 49:04. He improved his standing in the 100 breaststroke and finished in 1:00.06, enabling him to move into the finals. He was short of a top-tier finish by a miniscule yet enormously frustrating .06 seconds.

On Feb. 26, it was time for Chick to cash in on her hard-won positioning from the day before. She was able to visit the winner’s podium twice, with a fifth-place finish in the 200 freestyle with a time of 1:51.31, and a third place in the 100 freestyle, with a time of 51:57. Everything came together on Friday for Aman as well, as he won his heat and officially finished ninth, though he actually had a top-six finish time of 59:69. The two scored a combined total of 39 points, landing them a 28th place finish among the 90 teams.

Bulldog swimmers have closed a remarkable 2016 season with these state tournament events. “I saw so much improvement this year,” said Assistant Coach Franklin Halley, citing “a long list of successes, numerous personal records, strong work ethic in practice, Metro Buckeye Conference champs, three individuals and two relays to districts. It was an honor to help out with coaching.”

“The Bulldog swimmers were really on the map this season,” he said. “And with most of the team returning next year, I cannot wait until next season!”