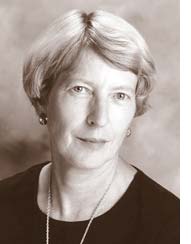 Marilyn Sarah (Sally) Mier passed away on Feb. 23 from complications of Alzheimer’s. She was born in Tucson, Ariz., on Jan. 5, 1938 to Mabel Nadine (Jelley) and Albert L. McHenry and raised in Arizona and California. Though she lived her adult life in Ohio and points east (including 46 years in Yellow Springs), she always considered the desert to be her home.

Sally devoted her working career to children and adults with developmental disabilities. She worked at facilities in Greene, Clark and Licking Counties before her 20-year tenure as an administrator with the Montgomery County Board of MRDD (now DDS). Sally served as a board member for the Greene County 169 Board (now DD). After her retirement in 1998, she served as a trustee for Toward Independence, Inc. in Xenia.

In her retirement, she volunteered extensively for SunWatch Indian Village in Dayton. Later, she co-founded and gave guidance to the Yellow Springs Leadership Institute. Sally served as a board member for the League of Women Voters at both the local and state levels and participated in the swearing in of new citizens in Judge Walter Rice’s courtroom.

Sally had many hobbies. She loved early American crafts including spinning, weaving, candle making, soap making, sewing and embroidery and was fascinated by the Shaker culture. Sally was an avid gardener and was proud of her herb and hummingbird gardens. She enjoyed music and theater and served as a board member with Yellow Springs Center Stage.

Growing up in the Southwest gave her a strong appreciation for the plight of Native Americans. In her retirement, she made numerous visits to Indian reservations.

A memorial service will be held at 2 p.m. on Saturday, March 5, at the Unitarian Universalist Fellowship of Yellow Springs. In lieu of flowers, the family requests that donations be made to one of the following charitable organizations: Toward Independence, Inc., League Of Women Voters Education Fund, Dayton Playhouse FutureFest, Friends Music Camp or your local Hospice.