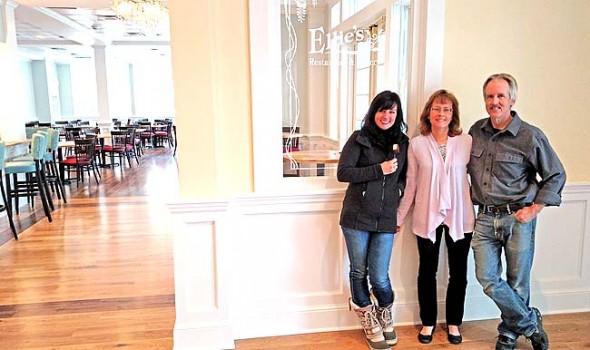 The Hammond family, from left, Katie, Libby and Jim, are developing the Mills Park Hotel, which they hope will open sometime next month.

The developer of the Mills Park Hotel, which has been under construction for almost two years, hopes the new hotel on the corner of Xenia Avenue and Limestone will open sometime soon. However, opening depends on many variables coming together, and it’s impossible to say for sure.

“If all goes well, a tentative opening date could be sometime in late April,” developer Jim Hammond said in a recent interview.

The new hotel will include 28 rooms, a banquet hall, a restaurant (Ellie’s) and a gift shop, the Little Miami Mercantile. Things are getting very close to opening, Hammond said, but the plumbing still needs to be inspected, which if the inspection goes well, leads to a health department inspection, and, if that goes well, an occupancy permit.

Hammond said that after opening, he looks forward to sitting on the building’s front porch and watching the world go by. However, he’s not sure that will happen anytime soon.

See the March 31 News for a more detailed article on the construction and opening plans for the Mills Park Hotel.

One Response to “Mills Park Hotel hopes to open next month”