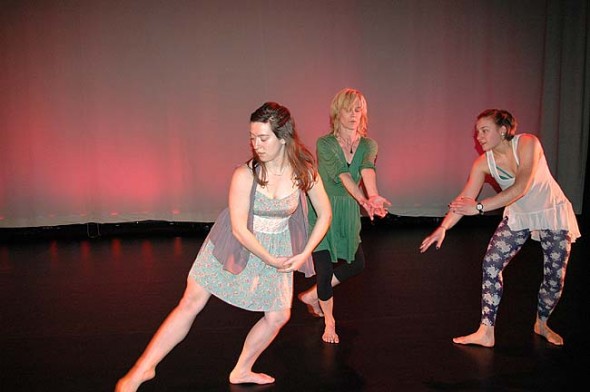 Katy Gaines, Angie Bogner and Sasha Mrozinski are among about 30 dancers performing this weekend in the annual Community Dance Concert at the Foundry Theater on the Antioch College campus. Here they rehearse at the theater while Foundry technicians set lighting for the show. Performances will be 7 p.m. Friday and Saturday, Feb. 26 and 27. Tickets are $10 at the door. (Photo by Carol Simmons)

The unity and diversity of community dance

About 30 dancers will be participating in this year’s annual Community Dance Concert to be presented this weekend at the Foundry Theater on the Antioch College campus. The large number is fairly typical for the popular event.

At its most fundamental level, the event celebrates dance — the making, the doing, the practice, the expression, the life of dance. It also embraces a concept of community that reimagines traditional definitions of who makes and performs dance.

“It’s a very unique concert,” said Marybeth Wolf, who has been involved variably over the years as a dancer, a choreographer and a co-organizer.

The event is unusual because it’s open to anyone who wants to dance, from beginners to dancers who have MFAs in the discipline.

“For me, I would never have been able to dance professionally,” said Wolf, who studied the art form and experiences the world through its medium of movement. “So (the Community Dance Concert) gives me the chance to choreograph, and dance, and express.”

As a modern dancer, she said that she, like many participants, have created dances that explored events and sometimes painful emotions in her life at the time. “I’ve done pieces in the past that were transformational and cathartic.” This year she decided to go a less specific route, and to dance for the sheer joy of dancing. The title of her piece is Finding Joy.

She said hers is one of 12 pieces to be performed Friday and Saturday, Feb. 26 and 27, at the Foundry. The evenings’ repertoire will represent a range of dance styles, according to organizers. In addition to various forms of modern dance, a belly dance performance will feature 12–18 women showcasing the traditional style.

Jill Becker, a locally based dancer and teacher who also has been a concert co-organizer in recent years, said that she will be presenting an improvisational piece with three sections that range in mood and activity. “Really it’s about paying attention and getting the sense of each other as a dancer.”

Becker said she appreciates the concert’s tradition of “broad diversity.”

There is diversity of dance styles, diversity of dance experience, and diversity of age, she noted. “Children will be performing in one of the dances, and three teenagers have choreographed” new works. “Some women in their early 20s who grew up in Yellow Springs and participated (in the dance concert) as children are continuing to make work as young adults.”

This year’s event “is a collaboration of many people,” Wolf said. Becker echoed that sentiment, noting Antioch College’s support as well. The Foundry’s tech crew is helping with sound and lighting and “they’re going to document the performance,” she said. “They’ve been really generous in hosting.”

But both Wolf and Becker said that there would be no Community Dance Concert without Valerie Blackwell-Truitt. The locally based dancer and teacher presented the first performances in the mid-1990s that evolved into the annual tradition we have today.

As a dancer from 1989–99 with the One Nation Performance Ensemble of Oxford, based at Miami University, Blackwell-Truitt said she wanted to bring the social-justice oriented group to Yellow Springs. She counts their local performance in 1993 as her first time presenting a concert in town. The community dance concerts, as they are known now, developed a few years later after she tore the rotator cuff in her left shoulder and couldn’t dance for a year.

“In a sense, I was being selfish. I just wanted to dance,” Blackwell-Truitt recalled. “I asked people in the community if they would like to perform” on the bill as well, and it was called The Valerie Blackwell-Truitt Community Dance Concert. “Afterward, I kept getting asked, ‘Are you going to do this again next year?’”

So she did. And each year after, until she moved to Colorado in 2009. “My dear friend Marybeth Wolf said, ‘We can’t let it die. Can I take it over?’ So in 2010, it changed to being the Yellow Springs Community Dance Concert. I was very happy for Marybeth to not let a Yellow Springs tradition die.”

Although living out of state, Blackwell-Truitt still came back each year to dance on the program, and she returned to Yellow Springs full-time a couple of years later.

“I would never have guessed in 1993” what would develop, she said. “It’s become a really great resource for people to express themselves through movement and an opportunity for me to give back to the community, and that’s been very satisfying.”

As a dancer who couldn’t practice her art for a year, Blackwell-Truitt feels deeply the importance of having a forum where anyone “willing to put themselves out there” can express this piece of their full self.