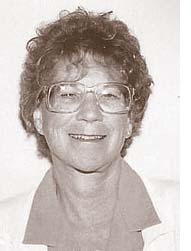 Suzanne P. Clauser, author, of Yellow Springs, passed away peacefully in her home on Monday, April 11, 2016.

Suzanne grew up in a suburb of New York City. She received a bachelor of arts degree and continued post-graduate studies at Indiana University, where she married Charles E. Clauser (deceased) in 1951. She was employed for five years (with a one year break) as a research assistant and, later, office manager for the Economic Research Institute at IU, and was cited with thanks in three economic monographs written at the time by the chairman of the institute.

In 1953, the Clausers spent a year in Rangoon and Upper Burma where Charles was a Fulbright Scholar, an experience that had a life-long influence on both of them. Reminiscences of this time as well as Suzanne’s first short story (set in Burma) were published in the British literary journal “Blackwood’s of Edinburgh,” founded by Sir Walter Scott. When Charles accepted a position as anthropologist with the Aero-Medical Labs at Wright-Patterson Air Force Base, they moved to Yellow Springs, where Suzanne started writing for TV.

She and Charles had and have a long history of volunteer service as well, both in Yellow Springs and in Dayton, where Suzanne gave the pitch that persuaded the Dayton Junior League to fund Dayton’s first planetarium, and subsequently taught the docents how to use it and how to present the universe to school children. Together the Clausers helped found the first Chamber Music Association in Yellow Springs, and both were among the first to serve on the new board of the Glen Helen Association. Suzanne helped found and named the Tecumseh Land Trust. She taught swimming at the local pool for 32 years, and for many years participated in the YS High School’s Lay Readers’ Program. She taught on the faculty of the Rod Serling seminars at Antioch College, and helped found the nonprofit Antioch Writers’ Workshop, where she both served on its faculty and its board as president. She has been recognized by Ohioana Library and the governor of Ohio for fostering the writing of others.

Late in her life, Suzanne undertook to develop a small-income housing development for a gentrifying village (Yellow Springs). What otherwise was a great pleasure, thanks to her partners Charlie Alexander and Bob Zearfoss, as well as associate Sue Jackson, was her great disappointment when the housing boom crashed.

Professionally, over 34 years (1963–1997), Clauser worked under steady development contract for the four broadcast networks and pay/cable, as creator and writer of primetime original scripts and adaptations (movies, series pilots, and “bibles,” four-to-six-hour miniseries, and her own one-hour series), the scripts drawing many stars, such as Richard Crenna, Lee Remick, Cloris Leachman, Peter O’Toole, Robert Wagner, Robert Young, William Shatner, David Janssen, Dorothy Malone, Johnny Cash, Eli Wallach, Jane Alexander, Billy Dee Williams and Kyle Chandler. Clauser is listed on Google as one of only five writers (and the sole female) who wrote regularly for the TV series “Bonanza.” In the 1993–94 season alone, Clauser had ten hours sole credit on NBC and ABC primetime miniseries, a rarity. Throughout her TV writing career, along with being known as an “expert” in Western history as well as modern “middle-America” (being from Ohio, a fly-over state), Clauser scripted a number of movies and mini-series about Asia. Suzanne was nominated often for professional awards; among those she won were: two Christopher Awards, two Western Heritage Awards, a San Francisco International Film Festival Award and a Writers Guild of America Award for Best Original Script of the year. Also a novelist, Suzanne’s publications include “A Girl Named Sooner,” “East of Mandalay” and “The Glad Season.”

Suzanne leaves behind loving friends and family and the legacy of her writing. Her selfless additions to the housing stock and density in Yellow Springs will endure. Her last days were at home with her caregivers and her cats. It is requested that contributions in Suzanne’s memory be made to your favorite charity. Plans for a memorial service will be announced.