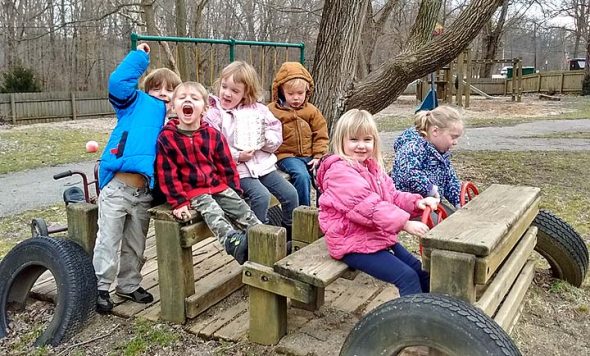 Kids at the Yellow Springs Community Children’s Center recently enjoyed themselves outside on the playground, part of the school’s philosophy of letting kids take the initiaitive and turn lessons into “teaching play.” The center is celebrating its 70th anniversary with a party on Thursday, May 12. “Almost everyone in town has some kind of connection to the Children’s Center,” said Mary Stukenberg, the center’s interim director. “It will be a feel-good celebration.” Pictured are, from left, Braden Derrickson, Evelyn Shotts, Vivian Smith, Hendrix Duncan, Lilly Brown and Danny Demmy. (Submitted photo )

The writings of Marcel Proust gave rise to the term “Proustian memory,” a vivid recollection of childhood that arises after sensing something we associate with our youth. Anyone who steps through the doors of the Yellow Springs Community Children’s Center will be flooded with memories of this kind: the texture of wooden blocks and the sound of children laughing bring back memories of a time when we played endlessly and were given license to live in our imaginations.

The Children’s Center has been creating these memories in Yellow Springs for 70 years. On Thursday, May 12, the center will be throwing a party to celebrate its many decades of care.

“Almost everyone in town has some kind of connection to the Children’s Center,” said Mary Stukenberg, the center’s interim director. “It will be a feel-good celebration.”

The anniversary party will held from 5–7 p.m. at the center’s longtime location on Corry Street. The Nap Room will turn into a sort of playroom for adults, offering hors d’oeuvres, wine, music and dancing, replete with disco ball.

“It will become an anti-nap room,” Stukenberg said.

People are encouraged to bring photos and stories to the party, she said. She’d like to tell the history of the center anecdotally, and wants to create a timeline of the important moments that have shaped the center’s legacy.

The Center’s “Big Toy” — the iconic wooden play place — will be rededicated, and there will also be an art auction featuring pieces made by children at the center, with all proceeds benefitting the school.

Everyone who has or wants to have a connection to the Children’s Center is invited, Stukenberg said.

The beginnings of the Children’s Center can be traced back to 1926, when Jane Cape, Julia Turner and Lucy Morgan put into action their plans for an interracial daycare, a rarity at the time. While the daycare relocated somewhat frequently in those early years, it strived to maintain its philosophy of letting children “test their powers” by treating them as autonomous individuals interacting with their environment.

The first established forerunner of today’s center was the Yellow Springs Community Nursery School. It opened on Oct. 14, 1946, with 19 students to start and six more anticipated in November. The Yellow Springs News reported on Oct. 17, 1946, that the community pitched in to help, donating everything from money to sand to the fence around the property, which was built by a “community of fathers who worked hard during three weekends.” The first field trips were to visit a puppet show and to see a darkroom, where the children saw a three-minute Kodachrome movie showing the home life of a wirehaired terrier.

Overall, “the joint efforts and contributions of many local residents and business firms resulted in a well-equipped school,” the article said.

The Yellow Springs Community Nursery was originally opened in the house of an Antioch professor. But in 1955, the Vernay Foundation donated money for the land and part of its current facility. Over 30 years later, the Yellow Springs Community Foundation provided funds for the rest of the building’s construction. A 2005 fundraising campaign raised $80,000 to restore the building’s roof, restrooms and playground.

From its inception, the Children’s Center has followed a philosophy of inclusion and respect for the tiny individual that is each child, according to Stukenberg. While the teachers have structured lessons and activities, the emphasis is on kids taking the initiative and turning lessons into “teaching play,” Stukenberg said.

When children invent games or engage in collaborative play, their activities reflect their nascent understanding of the world around them, said Stukenberg. Children’s games organically include rule making, socialization, decision making and moral reasoning, which puts their emotional and cognitive functions to work, she said. Stukenberg said the center is closely aligned with the theories of psychologist Jean Piaget, who said that intellectual growth informs every aspect of a child’s being.

Stukenberg said the center also tries to have a variety of interesting people come in to talk to the kids. Recently, kids have been able to speak with a cellist, a potter, a librarian and a real rocket scientist. The Center is lucky to be across from the Glen, too, she said.

The open-ended approach is a learning strategy appreciated by the teachers as well, Ellis said.

“I get paid to play,” she said. “I can be myself here, which gives kids a chance to be themselves too.”

Mallory Drover, an Antioch student who is doing her co-op project at the Children’s Center, said she was very impressed that teachers don’t act like babysitters but are actually involved in the kids’ lives. Drover herself knows sign language and has been able to use her skills to communicate with a student with Down syndrome.

“The teachers want to reach out in the most sincere way possible,” she said. “Everybody who works here really cares. You don’t always find that.”

As it has since its earliest days, the Children’s Center plays an enduring role in the lives of area residents. Ellis said she often sees kids she used to teach at the center. Many of them are now driving or are in college, and some even have kids of their own.

“They’ll come up and want to give me a hug,” she said. “It’s very rewarding that kids will remember their preschool teacher.”

Villagers who wish to attend the center’s birthday celebration may simply show up; no RSVPs are necessary, and there is no cost to attend.