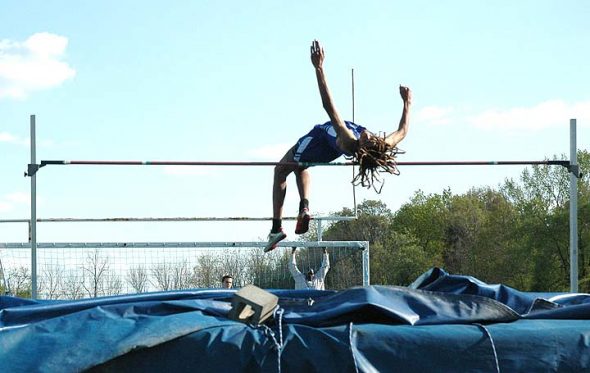 YSHS Bulldog Oluka Okia leapt an outrageous and record-making 6’6” in the high jump event at the Bulldog Invitational track and field meet last week. The Bulldogs’ performance included the shattering of many meet records, including a record held for over 20 years. (Photo by Dylan Taylor-Lehman)

In near-perfect weather this past Friday night, the YSHS boys and girls track teams had a great performance. The girls earned a first-place trophy, besting 10 other schools and finishing 126 points ahead of second place Emanuel Christian. The boys garnered a solid fourth-place finish.

Both the boys and the girls got to work setting meet records. Julie Roberts broke a 29-year-old school record by winning the 300 hurdles in a record-smashing time of 46.36, with Charlotte Walkey also placing her name in the record books with a 2:26.49 first-place finish in the 800 meters. The previous record was set in 1996. Oluka Okia finished in first and set a record for the meet with his winning high jump leap of 6’6”. Kaner Butler got first place and set a meet record in the 300 hurdles, with a time of 39.78. Butler also won first place in the 110 hurdles in 15.65, and fellow senior Dyemeisha Banks was also a double winner with her victories in the 100 and 200 meters.

Dani Worsham got first in the 800-meter race walk with a time of 4:31.10. Ayanna Madison took second in the 400 meters, as did Jude Meekin in the 3200 meters. Walkey, Banks, Roberts and Olivia Brintlinger-Conn ran to second in the 1600-meter relay. Amani Wagner took second in shot put. Third-place finishes included Jasmine Davidson in the shot put, Wagner in discus and Payden Kegley in the pole vault. Roberts, Brintlinger-Conn, Christina Banks and Dyemeisha Banks likewise got third in the 400 relay, as did Madison, True Hall, Kayla Brown and Stacia Strodes in the 800 relay.

Yellow Springs will host the Metro Buckeye Conference meet on Saturday, followed by the District Meet next week, May 14, at Welcome Stadium in Dayton.

While fairy tale endings are usually only the stuff of stories, sometimes they can occur in real life. The Yellow Springs High School softball team members scripted their own fairy tale ending this past week in their game against Dayton Christian. The game was the last of the team’s regular season schedule, and a first-place conference finish was on the line.

Under the memory-making lights of the stadium, pitcher Hannah Morrison saved her best performance of the season for last. She tossed a no-hitter in the final game of the regular season, striking out 13 and walking one.

Morrison was dominant throughout, said coach Jimmy Delong, but needed some spectacular plays by the defense to help preserve the no-hitter. In the second inning, shortstop Lauryn DeWine made an outstanding play when she tracked a short pop fly down the third-base line for an out. “DeWine immediately went after that pop up and she had to if she had any hope of catching it” said Delong.

Third-baseman Nekyla Hawkins then made a back-handed stab at a hot shot groundball, firing the ball to first base to get the runner.

In the last inning second-baseman Elly Kumbusky preserved the no-hitter when she made what might have been the play of the season. She sprinted in towards the pitcher’s mound to field a dribbler and without hesitation quickly turned and fired to first-baseman Gracie Price to nip the runner at first base for an out. Morrison didn’t fool around after that as she struck out the final batter to finish off the no-hitter.

The offense likewise excelled, scoring runs in the first inning and two more in the second. Dewine scored two of the runs, thanks to hits by Morrison and Danny Horton. The Bulldogs then put the game away in the sixth inning when they exploded for eight runs, thanks to two triples by Price. Overall, the team scored an astounding 13 runs throughout the game and defeated Dayton Christian with a final score of 13–0. The victory enabled the Lady Bulldogs to tie Middletown Christian to share first place in the Metro Buckeye Conference.

After the game, with the lights still on, Delong said he was pleased with the evening’s events.

“A win under the lights where my pitcher tosses a no-hitter, the defense plays error free ball, and the offense scores 13 runs — what a performance by both Morrison and the rest of the team. We put it all together tonight when we needed it the most,” said Delong. “You can’t ask for anything else from these girls. What a way for these girls to conclude their regular season with 1st place on the line.”

“And all of this the day before prom,” he added.

The tennis Bulldogs played their last game against Miami Valley last week, fighting the good fight but unfortunately succumbing to their opponents. However, coach Donna Silvert pointed out that Miami Valley is ranked fourth in the state, so the loss was a valiant one and a learning experience for the team. The team finished the season with a record of 7–3, a “pretty nice” finish to the season, according to Silvert.

While the team lost the last game, YSHS players did well in the first day of tournament play on Monday. The team’s three singles players each won their matches. Peter Day beat his foe from Northridge 6–0, 6–0, and Gabriel Day triumphed over his Urbana opponent 6–2, 6–4. Augie Knemeyer played his fourth-seed tournament match against a player from North Western, who had the discomfiting advantage of being a left-handed player who serves with his right. Despite the unorthodox approach, Knemeyer bested the southpaw soundly, with a score of 6–0, 6–0.

The team’s doubles and singles players will continue the tournament this week, with scores appearing in next week’s paper.

The YSHS baseball team is gearing up for tournament play, and two games last week underscored once again the fickle nature of fate and the quickness with which fortunes can turn.

The Bulldogs played Miami Christian in their first game of the week. According to coach Ben Cooper, it was the best game the Bulldogs had played all year. There was only one error and the team hit well the entire game. Clean defense and hitting the ball  -— that’s what it takes to win, said Cooper. The Bulldogs won 14–7.

However, the next game, again against Miami Christian, was not quite as successful. The team had one bad inning in which they gave up six runs, Cooper said, giving Miami Christian the advantage from that point on. The game was a loss for the Bulldogs, 13-9.

But the season isn’t over yet. The Bulldogs play their first game this week, against Mississinawa Valley.

The team was drilling ground balls at a recent practice, working hard to prepare for their tournament appearance. Senior and “probable season MVP” Jason Clarke was wearing a cast on one arm, as he suffered ligament damage when a runner hit his hand. But he had been dying to get back ever since, said Cooper, and was practicing third and pitched with the team. An oversized softball glove was fit over the cast. Clarke’s resilience was indicative of the team’s passion.

“If we bring our A-game, we can get away with some wins in the tournament,” he said.

Tournament updates will be featured in next week’s paper.