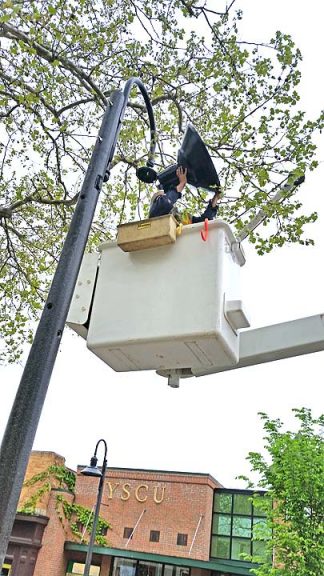 The Village electric crew was busy yesterday morning installing new street lamps on the west side of Xenia Avenue in downtown Yellow Springs. Five railroad-style lights were installed to take the place of the previous streetlights, which were taller and of a more modern design.

The work was part of the third and final phase of the downtown streetscape project, which began in 2012 under then-Village Manager Laura Curliss. While the project began due to the need for sidewalk repair downtown, it expanded to include the replacement of the tall streetlights with shorter, more energy efficient lights; the replacement of invasive and aged pear trees with young, native trees; and the burial of electric lines. Work on the east side of Xenia Avenue took place in two stages, with the third stage, that of the west side of Xenia Avenue, postponed until this year.