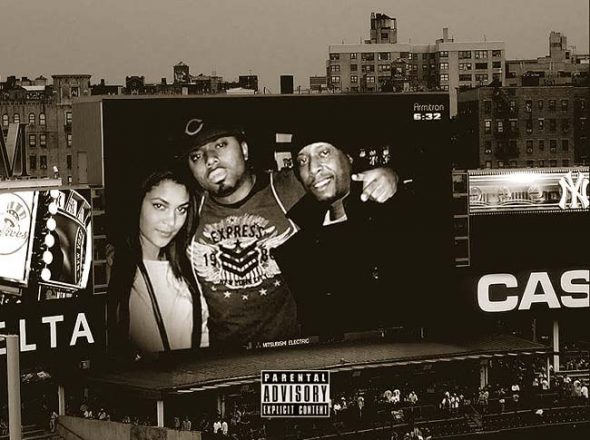 Issa Ali (area resident Issa Walker, center) is featured on a new single with legendary Brooklyn rapper Talib Kweli (right). Walker wrote, produced and performed on the track, which is available online. According to Walker, his approach to the song was simple: bring back the timeless hip-hop sound of serious lyricism over a classic beat. (Submitted photo)

It’s a rap—Issa Walker featured on a new album

Yellow Springs resident and resident hip-hop artist Issa Walker alternated between excitement and nonchalance when recently discussing one of his latest musical endeavors. Not only did Walker write the music for a song performed by one of his idols, but he got to rap on it as well. The song is called “Overtime” and features Walker performing alongside hip-hop legend Talib Kweli.

“He is a really cool guy to work with,” Walker said. “He’s a genuine person who lives what he says in his music.”

Walker, using the nom de guerre Issa Ali, wrote, produced and rapped on the song “Overtime.” The song is available now on his SoundCloud page and features Walker and Kweli trading verses across three minutes of unadulterated hip-hop. According to Walker, his approach to the song was simple: bring back the timeless hip-hop sound of serious lyricism over a classic beat.

Kweli, a Brooklyn rapper known for his solo collaborations and his work as one half of the group Black Star, is an artist Walker has listened to since early high school. The collaboration came about thanks to Walker’s work producing beats. In addition to writing music for his own projects, Walker composes beats for other artists. (In hip-hop, a producer writes the music that lyricists put words to. These beats often use samples or melodies from other music as part of the composition.)

Kweli had recently started his record label Javotti Media and was looking for instrumentals for the artists on his roster. Walker was able to send music to Kweli directly, who liked what he heard and used Walker’s tracks as beats for some of his artists. If a beat was hot enough, Walker said, Kweli would consider keeping it for himself.

After appearances on a handful of artist’s records, and crowd approval of those songs on tour, Walker was able to talk to Kweli about working on a song together. The result is “Overtime,” in which Kweli contributes an exclusive verse and gives Walker a shout-out at the beginning of the song.

The collaboration with one of his idols is a significant accomplishment, and is a major step on a path that he has happily walked since he was a little kid.

Walker grew up in a household where music was a constant, but when he discovered rap, the listening experience became that much more personal. Like any music fanatic, Walker can remember the first album he bought with his own money — Tim’s Bio: Life from da Bassment, by Timbaland. The album’s dynamics really impressed him. The album is half hardcore rap and half R&B, Walker said, with a coterie of guests from both genres. Walker was also taken with the fact that Timbaland writes and produces his own music, which inspired Walker to try his own hand at writing.

Walker laughed as he recalled his foray into making beats. He had a little keyboard that he would plunk on endlessly, driving his parents crazy. He also started writing lyrics in fifth grade, and by seventh grade, he and his friends began recording songs.

“We would have sleepovers and just rap all night,” he said. “We had a cheap mic hanging on a cardboard box.”

He took his interest to the next level in high school, buying his own recording programs and learning how to sample. Listening to music with a sampler’s ear gave him newfound respect for the music his parents listened to. Groups like the Temptations not only made for good sampling, he said, but demonstrated how effectively raw emotion can be expressed through music. Listeners can feel the pain, the emotion; everything about those times is caught up in those songs, he said.

Understanding music on this level also helped him mature in his approach to making music. He and his friends started rapping about things they actually did, and this more honest approach allowed him to develop the themes running through his music.

It is partly this attitude that led to his collaboration with Kweli, who is known as the “King of Conscious Hip-Hop,” Walker said. Walker met with Kweli last month in New York City and talked to him about the themes he was going for in the song. The conversation showed that they find the same things important, Walker said, and collaboration came naturally.

Getting his beats published and collaborating with serious artists has given Walker insight into the world of publishing, royalties and the many hoops burgeoning artists have to jump through. While “Overtime” was picked up by one of the biggest hip-hop blogs and tweeted by Kweli, taking it further requires playing the industry’s game, Walker said. Hiring a PR company is the next step in getting his name out into the hip-hop world.

“I’m just getting my feet wet. A lot more will come of it,” he said.

Walker is happy to get to work making things happen, but like any devotee of his calling, a true love for the art never leaves him. He has released a series of mixtapes as a solo artist and as part of Yellow Springs rap group Village Fam. His contentment stems from the abundance of good people in his life who believe in his talent and have helped him flourish, he said.

“Overtime” by Issa Ali featuring Talib Kweli can be found by searching for the title on SoundCloud.