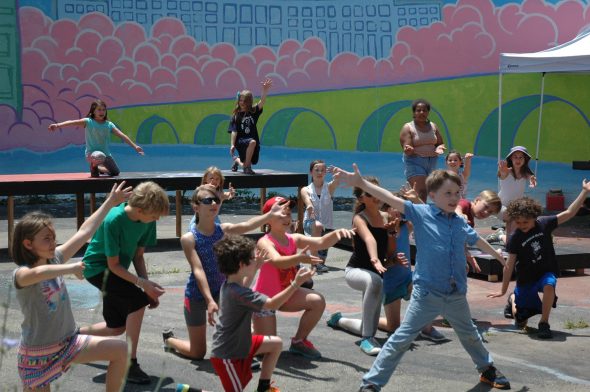 Actors in YSKP's "Alice, Although" braved scorching heat earlier this week as they rehearsed for this summer's production.

YSKP’s 22nd summer musical begins tonight with the debut performance of “Alice, Although.” The musical is an all-original work written, scored, produced, and starring local talent. More than 35 area kids are involved in this year’s production.

“The play shows Alice as a strong and confident woman,” said actor Maggie Knopp, 12. “Though times have changed, the same obstacles are still there.”

The production will include original jazz music, modern dance, and a rap battle, while “exploring how we both change and remain the same as we age,” according to YSKP’s website.

“Alice, Although,” written by Jill Summerville with music by James Johnston, runs from June 23–June 26 and June 30–July 3 at the Antioch Amphitheater. Each performance begins at 7:30 p.m.

Tickets are $10 for adults and $5 for students and seniors.

More information can be found at http://www.YSKP.org .