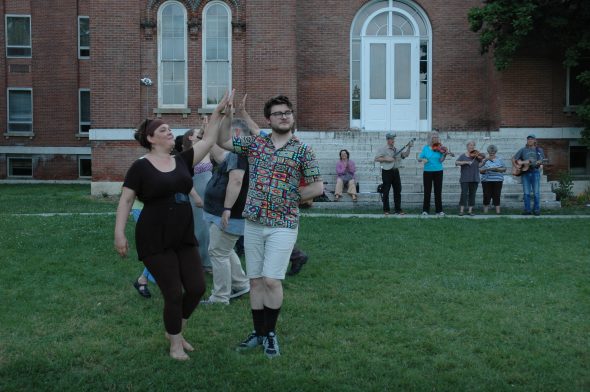 Miriam Eckenrode Saari and Garrett Young at a recent rehearsal for "Much Ado About Nothing," to be presented this weekend and next at Antioch College.

“Much Ado About Nothing,” a comedy from the middle of William Shakespeare’s career, will be presented at Antioch College this weekend and next by the Yellow Springs Theater Company. The production takes place outside on the lawn (Corry Street side) in front of Main Hall on campus, beginning at 8 p.m. this Friday and Saturday, July 15 and 16, and next weekend, July 22 and 23. The play will take place rain or shine.

“It’s my favorite Shakespeare comedy of all,” said Director Lorrie Sparrow-Knapp. “It’s about love after strife.”

The play is an homage to the world renowned Shakespeare Under the Stars, a repertory performance of all Shakespeare’s plays in the 1950s, directed by Antioch College theater professors Arthur Lithgow and Meredith Dallas, and also presented outdoors on the Main Hall front lawn.

All performances are free and people are encouraged to bring folding chairs, blankets and bug spray.