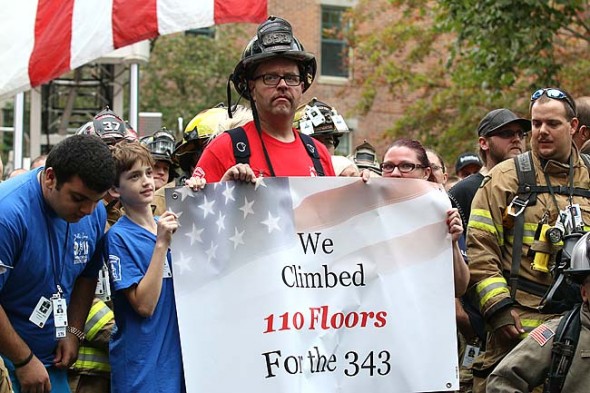 MTFR personnel, Jason Paoletti, stood at attention during the opening ceremony at the 2015 9/11 Stair Climb. (Submitted photo by Patrick O'Reilly)

The Miami Township Fire-Rescue will host the annual 9/11 Stair Climb event this Saturday, Sept. 10 at Antioch College. The event, one of many that will be taking place around the nation, is a fundraiser that seeks to honor the first responders who perished while undertaking rescue operations at the World Trade Center in New York City on Sept. 11, 2001. All funds raised at the event benefit the National Fallen Firefighters Foundation, a nonprofit chartered by Congress to honor the memory of America’s fallen firefighters. The organization, according to its website, works to “honor and remember America’s fallen fire heroes, to provide resources to assist their survivors in rebuilding their lives and work within the fire service community to reduce firefighter deaths and injuries.”

According to MTFR Chief Colin Altman, the local fire department got involved after attending a stair climb in Indianapolis four years ago.

“There were three of us who attended and participated and felt it was an important tribute event that we could pull off locally,” he said via email this week. “We worked with the foundation who were eager to grow the stair climb program and launched our climb three years ago.”

Altman said there has been a good turnout for the event in previous years; last year, there were 115 participants, and 26 volunteers who helped run the event. The local climb raised $17,500 last year, with over $700,000 raised nationwide.

This year’s event will kick off with special speakers Capt. Doug Cope, a retired Xenia Fire fighter who spent three weeks working with a FEMA rescue team at Ground Zero searching for victims, and Sharon Purdy, a retired paramedic and the widow of a fallen firefighter.

Participants will make the ceremonial climb in Antioch Hall, completing 18 laps of the building and its four stair towers, simulating the 110 floors of the World Trade Center.

“Every climber carries ID badges with the name and photo of one of the FDNY, NYPD or Port Authority Police killed that day,” said Altman. When climbers finish, they exit the building and stop to read aloud the name of the person they’re representing and ring a bell in their memory.

Altman pointed out that the event is not intended to make a political statement about the events of Sept. 11.

“Our event is solely a tribute to the fallen heroes,” he said. “We want to honor the men and women who ran into the Twin Towers so that we never forget their sacrifice.”

The 9/11 Stair Climb is sponsored by YSI, Morris Bean & Company, Dunphy Real Estate, Tom’s Market, the YS Credit Union, the YS Brewery, WYSO and the Chamber of Commerce. The event will be held from 9 a.m. to noon, with registration opening at 8 a.m. Registration for the event is $35 and includes lunch, snacks and a T-shirt. To register, visit http://www.firehero.org/event/yellow-springs-9-11-memorial-stair-climb/.