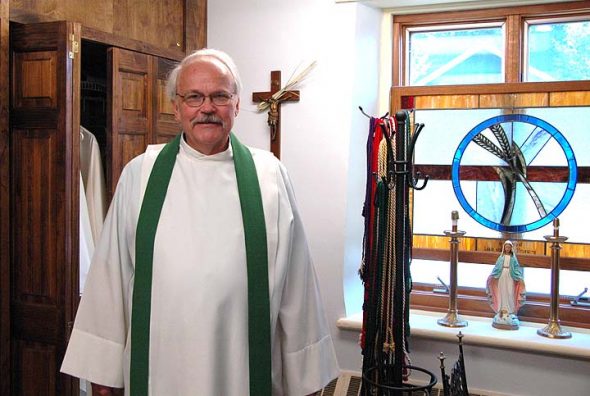 After several years of difficult divides under the leadership of a controversial priest, St. Paul Catholic Church has a new pastor and, some believe, new hope for healing rifts within the parish.

Father John Krumm, of Xenia, was appointed to the church for a six-year term this spring, and began as pastor on July 1, taking the place of Father Anthony Geraci. Deacon Paul Richardson, an ordained minister and Yellow Springs resident who has served St. Paul for 40 years, said Krumm is “a breath of fresh air” for the church.
“He’s open and laid back,” Richardson said earlier this month. “He’s reachable.”

Richardson was among several church members who noted, with approval, that Krumm had provided his cell phone number in the church bulletin and encouraged parishioners to call him.

“I’m a down-to-earth person,” Krumm said in an interview last week. “I try to listen well and respond to where people are.”

A youthful 65-year-old with a casual manner and a penchant for puns and jokes, Krumm has been pastor of St. Brigid in Xenia for seven years. He is also the pastoral administrator of St. Augustine in Jamestown. He remains in both those positions, while adding pastoral duties at St. Paul.

“I’m busy, and life is more confusing now,” Krumm said, with a laugh. “But I’m pleased. We’re moving forward.”
An ordained priest for 40 years, Krumm is a national leader in the small church community movement, which seeks to connect faith and everyday life outside of the ritual of church. Prior to being appointed to St. Brigid in 2009, he served as pastor of several parishes in Dayton, where he grew up. He has spent a lot of time in inner-city ministry, and was a jail chaplain early in his career.

“That kind of ministry has been a calling for me,” he said. “It’s not about fixing things, but about building community, about bridging and connecting.”

He hopes to use those “bridging and connecting” skills within the St. Paul community, which has experienced tensions in recent years, and between St. Paul and the other two area churches he leads, which now form a single “pastoral region” — linked to each other in new ways by sharing a priest.

“He makes the point that we have to connect with each other and be a community. I like that,” said Yellow Springs resident Andree Bognar, a member of St. Paul for 22 years.

The shift from being a stand-alone church to being part of a pastoral region is not new for St. Paul — the region has been in place for several years — but the sharing of a priest is. This is the first time since the 1800s that St. Paul has not had a priest dedicated to its parish, according to Deacon Richardson.

Church member Bognar said she’s not concerned about the new arrangement, recognizing it as a “sign of the times.” And in fact, pastoral regions and the sharing of priests among two or more parishes is an increasingly common arrangement in Ohio and across the country, according to Dan Andriacco, a spokesperson for the Archdiocese of Cincinnati, the governing body for Catholic churches in our region. Of the 211 parishes in the Cincinnati diocese, 134 are involved in active pastoral regions, he said.

The shortage of priests is a big factor in the formation of these regions, he explained.

Father Geraci, St. Paul’s previous pastor, was appointed in 2008 for a six-year term by the Archbishop of Cincinnati, and reappointed in 2014 for another six-year term. When he left St. Paul this summer, he was just two years into his second assignment at the local church. Richardson said he doesn’t know the reason for Geraci’s departure. Spokesperson Andriacco said last week he couldn’t comment on personnel matters, but noted, “It’s far from unprecedented that because of changing circumstances a priest will leave an assignment before the end of his term.”

Geraci attained “retired status” in 2015, but continued as pastor of St. Paul, as well as serving another area church, St. Charles in South Charleston. “The diocese is very grateful [Geraci] was willing to continue serving as pastor after retirement,” Andriacco said.

Geraci declined last week to comment on the leadership transition. He continues as pastor of St. Charles and also leads mass at St. Augustine in Jamestown.

As pastor of St. Paul, Geraci was a controversial figure. A homily he delivered in 2012, evoking Nazi Germany in connection with Obamacare, angered some parishioners. The incident and other divides caused some local members to leave the church. And last fall, tensions flared again with the controversial firing of a longtime church employee.

Richardson and other church members described to the News last fall a pattern of strained relationships, staff turnover and declining local membership and involvement at St. Paul during Geraci’s tenure. The Archdiocese of Cincinnati neither denied nor confirmed problems at the Yellow Springs church, and Geraci declined to comment at the time.

But with Geraci’s departure this spring, and the arrival of Krumm in July, the church has a new start, some members say. Richardson is pleased to see that some people who stayed away from St. Paul over the past several years are coming back.

“People are coming back, but it’s going to take a while. The division was so deep. It may take a couple of years,” he said.

Others, such as Sue and Richard Dillon, who have more than 125 years of membership at St. Paul between them, are returning to a church that, as Sue Dillon said, “will always be my home.” The Dillons have been attending mass at St. Brigid over the past several years, after no longer feeling welcome at St. Paul. They’ve gotten to know Krumm during this time, and feel hopeful that he is now also pastoring St. Paul.

“We have found him to be open and available. He listens to what you’re saying,” Sue Dillon said. “People will come to see that.”

The Dillons now attend mass at both St. Brigid and St. Paul, a kind of fluidity the pastoral region model encourages, according to Krumm. One consequence of that model, however, is a reduction of mass times at St. Paul, as Krumm seeks to balance his schedule across more than one church. The Yellow Springs church previously had six masses, four during the week and two on the weekend. There are now just two to three masses: Wednesday evening and Sunday morning each week, and Friday morning twice a month. St. Paul no longer offers a Saturday evening mass, a time favored by some villagers.

Krumm recently acknowledged the difficulty of that and other changes. “There are a lot of changes for people to get used to in a short time,” he said, adding that he’s “just trying to be present — as present as I can be.”
Asked about lingering divisions at St. Paul, he described sensing “some tension.” Parishioners have approached him with concerns and questions, and he’s tried to engage with those, he said. But he emphasized the importance of being “one church, even though we don’t always agree.” And there are already hopeful signs in that direction, he said.

“Common ground is coming out more. Yellow Springs is a diverse community and we don’t agree on everything. But we’re finding a better way of walking together.”